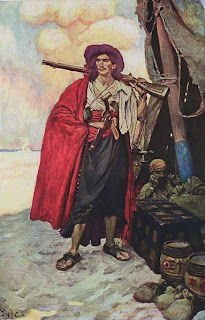 The idea behind combining D&D with piracy is pretty simple… pure old school D&D rewards bold plans that lead to lots of treasure - the paradigm of the game is XP for gold, by hook or by crook.  Furthermore, by placing adventures within reach of a ship, you introduce the resource planning and mobility from a sister game like Traveller - your dungeon crawlers become sea rovers.  It's a peanut butter and chocolate kind of marriage (if you like the Reese's cups, as I do).

I envision many of the adventures in such a campaign still featuring traditional D&D style delves once a given destination is reached - buried treasures in caves, ruined forts and monasteries abandoned by the Spanish, lost colonies, forbidden islands, ancient ruins of the Maya or Aztecs, and a healthy mix of mythological sites and artifacts. Plus, you know, acting like pirates once in a while and plundering.

The Caribbean changed a lot over the two centuries of Spanish colonization, and the kinds of raiders that pillaged those warm waters included French corsairs, Elizabethan sea dogs, Dutch freebooters, English buccaneers, French filibusters, and eventually pirates (after 1690 or so).

I'd rule out placing the setting in the 16th century, as most of the raiders were privateers working long distance out of European or English ports, and I think the region is much more interesting in the 17th or early 18th centuries when there are foreign colonies and local outposts competing with the Spanish.  Outlaw towns like Tortuga and Port Royal during the buccaneer period offer the kind of "adventuring home base" you need for gathering rumors, picking up crew, and setting out on the next jaunt.  For the pirates of the later period, there are new home bases like New Providence in the Bahamas, or mythical Libertaria in the Indian Ocean.

This is a bit of a history nerd question, but do readers have opinions on which period would work better for adventuring?  1690-1720 is considered the golden age of piracy; since most privateering was outlawed or strictly controlled by then, sea rovers during that time had no choice but to work outside any conventional law.  During the earlier periods, it was much more likely one governor or another could sponsor a ship, giving the raiders a façade of legality in one port or another.

There are other differences too - buccaneers tended to raid Spanish shipping and ports, hauling away the pieces of eight and gold doubloons of pirate lore, and they had their loose code as "Brethren of the Coast".  The Jolly Roger of pirate fame was an artifact of the later age, and the pirates of the golden age typically captured prosaic merchant goods instead of coin-filled chests of booty (although some of the treasure hauls of the Indian Ocean were massive).

I suppose a third approach is to go unhistorical and dump all the ingredients into the soup at the same time; for instance, in the Pirates of the Caribbean movies, the time is later (1720 or so) when the East India company and navy are cracking down on piracy; however, the movies use Port Royal as a base (30 years or so after it sank into the ocean, in the real world), and Tortuga is still a pirate haven in the films, 60 years or so after it diminished in significance.  There's a cogent argument to be made that once you add undead monkeys, ghost ships, pagan gods, and dark magic to any milieu, there's no use crying over a bit of mixed up history.

Seems like a good time for a poll, buckos.  Cast a weather eye over to yon right hand column, if you will, and please be leaving your mark on me latest inquiry.


The image is Howard Pyle's painting, The Buccaneer was a Picturesque Fellow

Email ThisBlogThis!Share to TwitterShare to FacebookShare to Pinterest
Labels: Goblins of the Spanish Main, Polls