Help! My Megadungeon is a Zoo 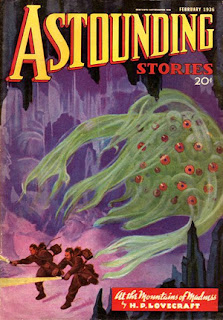 I can use some advice.  See, I've got this megadungeon game, and it's rolling along like gangbusters, but it's evolved into something different than how it started.  I started with this idea of creating something inspired by Lovecraft's city of the elder things, only with grey aliens, and vikings.

Along the way, it became a bit like the wild west - with lots of competing viking groups looting the ruins - many of them every bit as amoral and violent as the player characters.  Human encounters are such a good time.  Sometimes those rival explorers get infected with rage madness and become berserkers, lurking in the dungeon like predators, or they mutate into muscular cannibals with bulging eyes.  The dead ones come back as gjengangers - Norse zombies.  Then there are the remnants left over from the Ancients, the alien servitors, robots, and rogue super computers that once maintained the city.  It's definitely weird, maybe even a bit gonzo.  It's plenty of fun.  But it's usually not scary.

Traditionally, horror scenarios feature more atmosphere, building dread, and a shocking revelation.  I originally wanted the Black City to be horror-themed, but quickly abandoned that plan for high adventure and battle-axe-fueled mayhem.  It wasn't a wrong choice.

But as I'm looking ahead to future projects, the idea of a sprawling horror dungeon won't die:  Are the elements necessary to make a compelling megadungeon campaign compatible with running it with a horror theme?  We should be able to do it, right?  We have the technology.  We can make it better, faster, stronger (or darker, scarier, and creepier).  I'd ask for a show of hands, how many folks have run their own successful horror-themed megadungeons, but that's just silly - it’d be an oddball niche within an already small oddball niche.

This might just be my blog's white whale.  Whatever I do after the Black City, it's got to be frightening and dreadful.  A few concepts I've posted in The Junkyard could form the backbone for such a venture - something like the dungeons beneath Harrowhome Manor on the Yorkshire Moors, or the Benighted City of Lichtstadt.  To get my head straight, I may take a day or so to mull and list out the strengths and weaknesses of the megadungeon format, to facilitate discussing which ones undermine the horror theme.

Consider, once again, Lovecraft's city of the elder things from At the Mountains of Madness.  It's a nigh endless cyclopean ruin, on the high wind-swept plain beyond those forsaken mountains.  Massive, sprawling tunnels lie beneath the frozen city.  Is it a megadungeon?  Why or why not?  Food for thought.