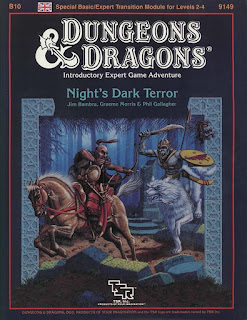 It's odd reviewing a game product 20+ years old, but since it's one of the lesser known gems of TSR era D&D (perhaps because it was developed by TSR UK), and as it just appeared on OBS, I'm forging ahead.  Full disclosure, many an old Mystaran campaign of mine started with Keep on the Borderlands or Night of the Vampire, and introduced Night's Dark Terror at an appropriate time.  (Night's Dark Terror just went up on DnD Classics).

Here's a brief overview of the adventure; the player characters find themselves on the Karameikan frontier, where numerous small homesteads beyond the  moors are being burnt to the ground in the night by marauding goblin tribes.  The adventure describes the sprawling eastern frontier as a wilderness hex-crawl (3 miles to the hex), and has populated Eastern Karameikos with numerous small lairs, tombs, ruins, and settlements, for the players to discover as they track the marauding goblin tribes.

Over the course of the adventure, they learn about the details of a sinister organization coordinating the attacks, and the trail eventually leads them to discover a lost valley in a northern mountain range, replete with two ancient cultures and a crawling horror prowling the ruins of a fallen civilization.  That capstone locale is overflowing with the kind of pulp horror greatness that would make A. Merritt proud.

What's fantastic about the adventure is the way it helps the novice DM transition from site-based dungeon crawls that typically kick off a 1st level game, into preparing wilderness hex crawls, and it also introduces timeline structures, calendars, and weather.  This adventure had a strong, formative influence on my game mastering style.

Physically, it's about the twice the size of a typical TSR-era adventure, coming in at 74 pages.  There are 6 pages of maps near the back, and the original included a poster map of a homestead where the party is besieged by marauding goblin tribes (and needs to hold out until dawn).  The PDF includes a scan of various cardboard counters that could be used with the poster map.

It's not a perfect module; the introductory plot hook should be replaced by something suitable to the player characters (but that goes for 99% of published works).  It uses annoying bits of boxed descriptive text.  It's heavily tied to the setting of the Grand Duchy of Karameikos, which is found in the back of the Expert book.  The later Gazetteer of Karameikos is nice to have, but not necessary.  Nonetheless, it would be a lot of work to extricate the adventure from the setting and place it in a homebrew setting.  Like any adventure that tries to anticipate the results of earlier player activity, the writer provides a few options; for instance, suggesting a replacement villain if an opponent from an earlier encounter wasn't able to escape the player beatdown.

I highly recommend checking this one out if you missed it back in the day; Karameikos is a solid default setting (I regaled its virtues back here:  Ode to Karameikos).  It's easy to sprinkle a few pre-made adventures into the area for 1st level characters, and use the events of B10 Night's Dark Terror and the wilderness hex crawl of Eastern Karameikos once the players reach 2nd and 3rd level.
Posted by John Arendt at 10:00 AM