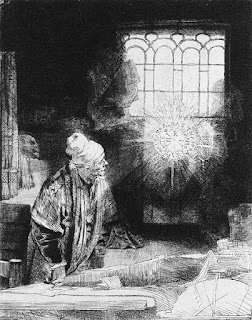 I realized there's a through-line in all of the fantasy books I've been reading lately - they've all involved the importance of names and language.  I'm reading the Earthsea trilogy aloud to the oldest kiddo; those  books strongly feature the power of true names and language; the language of wizards is an older tongue (the language of dragons), and to name a thing in the old language is to have power over it.  The major arc in the first novel, A Wizard of Earthsea, is for the protagonist to learn the true name of a creature of darkness he released into the world, and thus defeat it.  There's an awesome showdown with a dragon, where the young wizard Ged rightly guesses a dragon's true name and avoids destruction - also underlining the importance of paying attention to history and study old books.

I recently finished The Chronicles of the Black Company, and am eagerly looking forward to continue the series.  Major plot elements involve recovering and guarding old records left from a fallen empire; only late in the story do the protagonists suspect the old documents contain the true names of the immortal antagonists facing the Black Company.  Ultimate success hinges on piecing together scattered lore and finding translators that read the dead languages before a final reckoning.  I greatly enjoyed the Black Company; the novels portray the pragmatism of an elite military faction weaponizing magic in a world of swords and sorcery.

It seems like I should be able to rattle off more fiction that features the power of names; I'm just not remembering… of course, the Dresden files are full of true names and the importance of little bits (blood, hair, fingernails) to target the magic; the Eragon young adult books had the theme as well.  I suppose we're all familiar with He-Who-Must-Not-Be-Named.  Hellboy is bewitched when called by his true name, Anung Un Rama.  And no exorcist or demonic possession movie is complete until the priest names the demon as part of the dramatic ritual of removal.

For that matter, the power of names has a strong religious element to it in Western culture; it calls to mind the Greek "logos", and the hymn at the beginning of the gospel of John:  In the beginning was the Word, and the Word was with God, and the Word was God...  The name of YHWH, the sacred Tetragrammaton, was forbidden to be spoken because of the power and sanctity of the name.  Off hand, though, I'm not placing the first literary instance of calling out the name of the devil and having him appear.  Perhaps it was Marlowe's Doctor Faustus?  Don't say Bloody Mary seven times in front of a mirror.

Our friends in the Cthulhu space have not overlooked the theme; in the dreaded twelfth volume of the Revelations of Glaaki, reading the name of Y'Golonac subjects the reader to the attention of the god, potentially turning the victim into an avatar of Y'Golonac and a channel for demonic manifestation.

In a moment of monkey brain, my thoughts even jump to TS Eliot, and Old Possum's Book of Practical Cats.  The naming of cats is a difficult matter, after all - it isn't just one of your holiday games.  Now pardon me a moment while I go scrub my brain and get back on task.

The D&D game hasn't had a lot of interplay with the true name motif.  A few monster entries in the Monster Manual and Fiend Folio mention the value of true names - mostly involving demons and devils, and amulets or talismans that grant power of the entity.  I seem to remember Skeleton Warriors were the same way with their medallions

THE LOST CAVERNS OF TSOJCANTH* greatly expanded the portfolio of extra-planar spells, and many of them require the entity's true name; part of the power and allure of the Demonomicon of Iggwilv is that the master witch scribed various demonic true names in the book, giving the owner ready access to forbidden knowledge and the means to execute on it.

The spells from the Demonomicon are carried over into UNEARTHED ARCANA, and supplemented with some new ones, such as an actual True Name spell, which lets a caster run roughshod over a victim if he possesses the name - changing the creature's form, sending it far away, or making Suggestion-like demands.

The clones or sequel games haven't gone much further.  LOTFP has a high level spell named Demand, which functions akin to True Name, but requiring bodily bits of the target - straight out of Frazier and theories of sympathetic magic; I like the flavor.  Holy Word is a spell across the editions that calls to mind the forbidden Tetragrammaton.  ACKS didn't seem to have anything around true names, though it would be ideal as a high level ritual for either clerics or wizards.

The exciting thing about this motif - uncovering an opponent's true name as a means to power, whether as part of a spell, ritual, or simple plot device - is that it supports excellent quests beyond the dungeon; the characters might need to borrow a tactic from their Call of Cthulhu brethren and spend time in dusty libraries with restricted tomes, traveling to distant sages, or embarking on a bit of archaeology and tomb-raiding.  Sign me up for getting more of that into my D&D games.  As it is, I'm always this close (pinches fingers) between ditching adventure-style D&D and running my fantasy games like a Cthulhu game.

I've got some ideas of (modest) house rules or additions to make true names universally important if they can ever be discovered; what have you seen out there, either in other games or later editions, as mechanical ideas for making true names important?