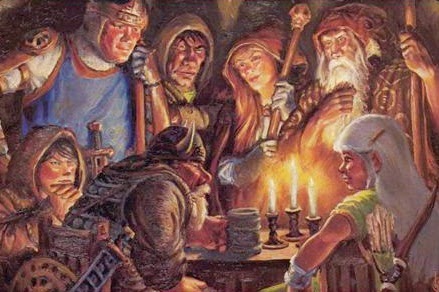 I'm formalizing a new technique for my sprawling megadungeon, Taenarum.  Let me know if you've done anything similar, and how it's been working out.

The basic problem is scope.  Taenarum, the entrance to the Underworld, is somewhat large - it is spread out, if not dense.  Each dungeon level spans 4 sheets of graph paper as quadrants.  The quadrants contain anywhere from 25 to 40 rooms, and each has a slightly distinctive theme.  The main road (a vaulted 20' x 20' passage) wends through all 4 quadrants as it spirals down into the earth, eventually leading to the River Styx some 9-10 levels below.  On either side of the main road are the many side passages and lairs that constitute the encounter areas for that level.

I'm pacing the dungeon so that a party should have to explore and loot somewhere between 1.5 and 2 quadrants before feeling ready to head down to the next level.  I certainly don't expect anyone to clear the dungeon.  It's just not that interesting to crawl a massive dungeon room by room.

In the past, I've used rumors and hints in town to give the players more choices about planning their game session.  The idea of calling them "rumors" and "quests" is to put some more structure and discipline into the mechanism from my side of the table.  Rumors are nuggets of information that don't have an expiration date;  quests are windows of opportunity to do something for gain, but if you pass the opportunity by, it's assumed some other adventuring group attempts the quest and the opportunity is now gone.  I just completed mapping and stocking the final quadrant of level 4, so I'm way ahead of the players and campaign - I'll be able to start on the campaign hex maps shortly.  I'm circling back to create rumors and quests for the 16 or so quadrants that are already out there.

Here's why these types of things, the rumors and the quests, are important.  The players need information to make decisions and create plans.  If the players are aimlessly wandering, and know very little about the dungeon, each decision - to go left, or to go right - isn't much better than a coin flip.  The game is much more satisfying for all involved when the players are creating explicit plans to follow their own goals.

The players naturally pick up clues and information just by exploring the dungeon, certainly.  You want them to have a list of open questions and potential goals or targets that carry over from previous sessions, so each game night starts with them planning the night's excursion.  Almost every game session of Taenarum starts back at the adventurer's tavern.  The image of grubby adventurers pouring over maps and notes and arguing over objectives across a wooden table, surrounded by mugs of drink, is fairly well grounded in their actual behavior.

I give the players an opportunity to learn a new rumor each week just by networking at the adventurer's guild hall - they've gone out of their way to make introductions to some of the other groups that visit the place.  Now I'm going to start formally introducing quests - maybe not one per session, I'll see how the pacing goes.  I'm going to attach some kind of monetary award to the quests to make them more enticing - but ultimately, remember that the real rewards are in the dungeon.  Perhaps a few hundred gold pieces (per dungeon level of the quest) is enough?

Since I have two different groups of players exploring Taenarum, introducing rumors and quests gives them additional reasons not to trod the same ground.  I may have mentioned this, but they do share notes and try to visit the same places if there's a chance to get the same boon!

I could eventually add people to act as patrons for the quests, but for now I'll just improvise a villager, adventurer, or visitor to the town as the situation requires.  One of the first things I make for a new campaign are some tools for quick NPC generation - they come in super handy for these types of things.  Perhaps I'll even introduce a message board where quests get posted.

Below are some sample rumors and quests for the four quadrants of level 1.  One of the groups already discovered the source of rumor 1.1 (the shrine of fate) and guided some traders to the market (quest 1.2).

1.1
Rumor:  There's a secret shrine to the Fates that grants boons - a bronze man points the way!
Quest:  Clean the despoiled shrine of the goddess Aphrodite and earn her blessing.

1.2
Rumor:  The Arch of Greed - a great treasure lies beyond it.
Quest:  Find the shortcut to the monster market to help guide some traders.

1.3
Rumor:  There's a chasm that provides quick access to a few of the lower levels.  Bring ropes!
Quest:  Rescue another adventurer from enslavement to the dryads (or the alseids - can use this one multiple times).

1.4
Rumor:  There's a statue hidden in a pit that pours healing potions out of it's mouth!
Quest:  Pig-men of the sorceress kidnapped my daughter, please rescue her.  (In reality the daughter ran off to be an apprentice).

*Image is from The Shady Dragon Inn, a great resource for NPC's and parties for classic D&D.  Sadly, it's not in PDF on dndclassics.com... yet.
Posted by John Arendt at 8:12 AM