My new campaign started at the beginning of April.  It's a Greek-myth inspired dungeon called Taenarum.  The minions of Hades, the god of the underworld, have turned the legendary road to the Underworld into a sprawling megadungeon filled with traps, tricks, and wealth, to lure and defeat the followers of the other gods.  I wanted a setting that was high fantasy and characterized many classic tropes of D&D and dungeon crawling, appropriate for my kids and family while also being interesting to the adult gamers.  So far, so good. 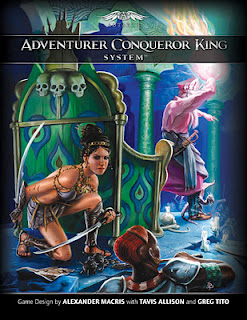 I also decided to structure the campaign using ACKS - Adventurer Conqueror King System.  Most of the games I've run the past two years have been a bit more horror-themed and used Lamentations of the Flame Princess as the rules.  Both ACKS and LOTFP are OSR clone games derived from BX style D&D using the OGL.  I picked ACKS for this campaign because I plan on building out the campaign world to allow military campaigns, domain rulership, and campaign roles, and that type of support is built into ACKS from the ground up.  It's a solid campaign builder rules set.  After the first month and a half of using the rules, here are some of the player-facing elements that have had the biggest impact on our games.

Character Creation
ACKS supports the various standard class types you'd see in BX, but the core book adds a number of alternative classes like Bard, Explorer (a ranger variant), and Assassin that you'd see in something like 1E AD&D.  The Player's Companion adds a ton of additional classes, like the Shaman, Barbarian, and Paladin, along with demi-human hybrids that combine popular base classes.

As referee, I'm content with just the core classes in the game (fighter, cleric, thief, and magic user).  However, the players in both groups immediately gravitated to alternate classes.  We've had paladins in both games, dwarven craft priests, the elf magic user \ thief combo, a bard, an assassin, and an explorer.

The other player-facing option is the proficiency system.  A few of the proficiencies are combat skills (like bonuses for a fighting style) but many of them are knowledge-based and have been popular with the players.  Normally I have a first aid style house rule, but the Healing proficiency eliminates the need for a house rule and makes those proficiency decisions carry more weight - it's fairly important to have 1-2 guys with Healing skill to help with first aid, especially at 1st level.

I'm a huge fan of "templates".  Templates are character concepts that include a few pre-selected proficiencies, a wealth roll, and full kit of starting equipment.  It makes character creation really fast for the players and helps with generating NPC's quickly as well.

Spell Casting
The biggest change to spell casting is not requiring memorization for Magic Users or selection for Clerics - no more Vancian magic.  If a given spell is in the character's repertoire, they can use it on demand.  They're still limited to the same number of spell castings per day, but if a character can cast 2 first level spells per day, they don't have to preselect them.  The rub is that spell casters have access to a smaller personal selection; a magic user might have 2-4 total first level spells in their spell book.  In other versions of D&D style games, casters aggregate a lot more diversity in their spell book over time.

As you can imagine, this approach has been very popular with the players.  I've seen a little more use of utility spells than before - the Magic Users sometimes cast spells other than Sleep, for instance.  I'm looking forward to seeing a level 2 cleric in action and whether this means less Cure Light Wounds and more creativity with the clerical lists.

Combat
Fighting characters in ACKS are remarkably fun at low levels.  The default game has a cleave rule that grants a free attack when a fighter drops a foe, and it has allowed the 1st level fighters to shine on multiple occasions.  Fighters also gain a damage bonus, reinforcing their ability to cleave.  I'm always glad to see enhancements that help fighters in a more elegant way than AD&D's weapon specialization.

ACKS uses a different approach to armor class.  Characters have a single base target they're trying to achieve with a to-hit roll - for all first level characters the number is 10 - and armor class is added to this number.  A monster with medium armor might have AC 3 (10 + 3 means you need a 13 or better to hit) while a heavily armored opponent might have AC 6 or better (16 to hit).  After a game session or two, it's been really easy to manage at the table.

One of the other big changes in combat is the death and dying rules.  Dropping to zero hit points or below only means the character is knocked out of the fight; until someone stops to survey the damage, it's not clear if the person is dead, dying, or just unconscious.  Factors for death and dying include whether the knocked out character is at zero hit points or lower;  does the person trying to stabilize them have first aid; is magic healing involved; how quickly did you get to stabilize the person after the fight.  Even when the character recovers, there's the chance to accumulate nagging injuries and scars, which add some flavor to the results.  We've had guys that can't be saved due to mortal injuries, bleeding out on the ground; one of the fighters has a permanent limp, and another is basically 'punch drunk' from having his bell rung too hard (yo Adrian).

Overall, I'm really happy with how the ACKS rules are playing out at the table, and the players are definitely enjoying the variety, choice, and subtle increases in character power.  It hasn't stopped the game from being challenging or deadly.  It's been a great choice so far for this style of game.  I haven't gotten far on building out the larger world, so I can't fully report on applying the campaign setting creation guidelines.  I'm sure I'll be able to report out on those experiences within the next month or so.

Does anyone else have experience with ACKS, and what are your observations?