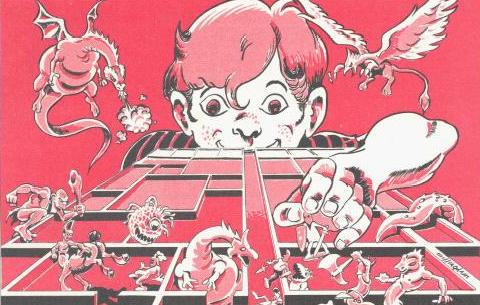 I've been meaning to do this for a while - list out the practices I've incorporated into building my megadungeons.  I've been running megadungeons for the past 3 years and have been building up some useful experiences.  The previous megadungeon was called The Black City - it was all about Vikings exploring the dungeons beneath a ruined, alien city in the frozen north.  The current campaign (Taenarum) involves the road to Hades.  The defiant god of the underworld has populated a massive dungeon with monsters and traps to lure arrogant heroes to their deaths.  I've also had this on again / off again relationship with a project called Harrow Home Manor, but it's on the shelf for a little while why I focus on summer gaming with the neighborhood kids and family - Harrow Home was too horror oriented.  I'm sure I'll get back to the horror soon.  That is not dead which can eternal lie... you know how the lines go.

The concept behind a megadungeon is to have a location expansive enough that most or all of the adventures can happen in and around the dungeon.  During the campaign, there will be side treks in the wilderness and excursions to towns and cities, but the primary action is back in the main dungeon.    The dungeon should have enough material for a party of adventurers to progress through many levels of experience by moving down to more dangerous levels - maybe all the way from levels 1-10 if you're ambitious.  I've incorporated another piece to the definition as well - the megadungeon should be large enough that multiple adventuring parties can be exploring it at the same time.

In no particular order, Beedo's principles for the megadungeon campaign:

Top Down Design
I start with a compelling rationale for the megadungeon - an elevator pitch - and then make sure there's a good variety of themes for levels and sublevels.  This provides an outline for the overall project, a roadmap on where you're going.  Here's a recent example of this approach:  Nodes of Taenarum

Accessibility
I like the megadungeon to have "highways" in and out - a mechanism for fast access that lets experienced parties quickly get down to the unexplored areas without wasting a lot of table time dealing with trivial wandering monsters and travel.  The Black City had 'the transit tunnels', a series of subway tunnels beneath the ruined city.  Taenarum has the wide, spiraling 'road to the Underworld'.

Vertical Transit
Each map should have multiple ways up and down (unless choke points are an explicit part of the design - but like salt, use them sparingly).  I also like chutes, elevators, and portals.  The vertical access points also provide rationales for why monsters of higher and lower levels mix it up.

Use a Stocking Algorithm
I typically use a home-made random stocker modeled after the Moldvay BX version, where 1/3 of the rooms are either empty or contain monsters, and the other 1/3 is either a trap or special.  I've even done some posts on the blog giving some ideas how to build a random stocker in Excel.  Take the time to create useful trap and "special" tables for yourself.

Deeper Levels = Greater Danger
Make it clear that deeper levels are more dangerous.  The megadungeon is a player-driven sandbox, and this structure lets the players have a degree of choice over the amount of risk they'd like to undertake.  Here's an example of a rationale for why depth = danger:  The Dungeon as Estuary.

Gold as Experience
Making gold the primary vehicle for gaining experience motivates the players to seek lucrative hoards and prioritize treasure over combat.  Roleplaying, trickery, and noncombat solutions are just as relevant as fighting.  The standard for giving out experience is about 80/20 - 80gp for each 20xp of monsters killed - a 4 to 1 ratio.

Progressive Elaboration
Start with a minimal keyed description for each room, and add more details only as necessary when the area becomes relevant for game play.  It lets you create the maximum scope in the least amount of time:  Developing the dungeon through progressive elaboration.

Pacing Advancement
A major advantage of using Gold as XP is that you can calculate how much treasure can be potentially recovered from an area as a lump sum, allowing a top-down approach to allocating experience across each level and sub-level.  This gives the referee rough insight on how quickly the party will be ready to descend to more dangerous areas.

Harmonizing Random Results
I'm a big proponent of not altering dice rolls during game play, but I do advocate adjusting random results during dungeon stocking.  However, the challenge of reconciling inconsistent random results (like antagonistic monsters living nearby) spurs creativity.

Set Piece Locations
One way to ensure large semi-random levels maintain their interest is by including some well-designed set piece encounters on each level - they act as points of interest, destinations, and landmarks.

Factions and NPCs
Too many unintelligent monsters are boring.  Rawr, I'm a monster.  Invest time in creating interesting factions and NPC leaders that have their own goals and motivations for being in the dungeon.  It opens up a political roleplay dimension during dungeon exploration.

Overarching Stories
Don't be afraid to put some story behind the dungeon inhabitants.  "The cultists of Pan are exploring the dungeon to find the lost elemental artifacts and return the world to primordial nature; the followers of Hecate want to open the gates of Tartarus".  Giving the NPC factions motivations and goals allows stories to emerge naturally as the players interact with them.

Rivals
One of my signature elements is to have lots and lots of NPC rivals to the players - other adventurers, explorers, treasure hunters, and so forth - friendly rivals back in town, dangerous opponents when met in the dungeon.  Some of the most memorable moments emerge when the players finally get the better of their long time rivals.

X is for Killing
The megadungeon is a sandbox where the players are free to try anything; if you've put something in front of a group of players all holding sharp pointy things, don't be surprised if they stab it.  There are no DMPC's or Mary Sue NPCs in the sandbox:  X is for Killing

Campaign Events
Have a list of random events that are happening in the world, place some of them on the calendar, and call them out as they happen.  Even though the players are focused on the dungeon, this puts the world in motion and creates a sense of time and verisimilitude.  Example:  Campaign Events for the Black City

Flow of Information
There needs to be a steady flow of information from you to the players so they can plan interesting excursions into the dungeon.  Two easy forms are rumors and quests, discussed just the other day:  Rumors and Quests.  Treasure maps are awesome too.

Plan to Restock
My players don't typically return to areas they cleared previously, but the dungeon should provide a rationale for why monsters return and areas become populated again.  In Taenarum, there are Stygian wells that allow undead and spirits to creep back into the dungeon, and there are powerful servants of Hades that literally reset traps and restock areas with enchanted monsters.

I hope to make this a living list of principles - I'm sure I haven't captured everything in one pass!

Edit - here's the first thing I forgot to include on the first pass:

Support Episodic Play
Place a town nearby the dungeon.  Start and end each game session back in the town (preferably at the tavern, for style points).  This allows players to come and go in between game sessions - important when you're gaming with adults who can't meet every week.