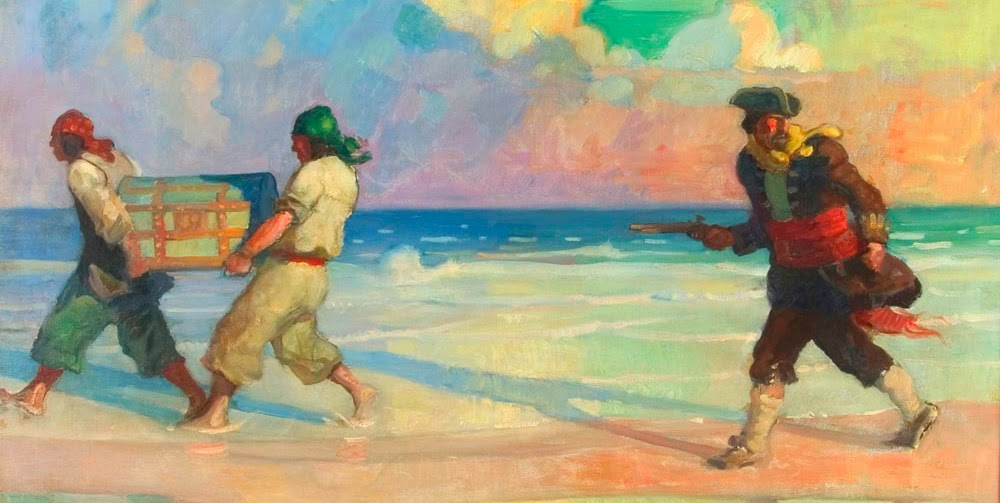 D&D and Pirates.  I can't quit you.   The weather is warming up and a (not young) man's thoughts turn to horror.  Horror and rum and pieces of eight.  Yo ho ho and the middle school band even played "The Legend of Pirate's Cove" for their competition piece.  Clearly the universe is flashing me a sign, a blinking neon sign, that D&D and Pirates needs to happen.

Last week was good, it was my first time visiting San Francisco.   I was traveling for a technology conference, and had plenty of time in between sessions and whatnot to fill my notebook with scribblings on Xibalba, a Mesoamerican portal to the underworld.  The Greek megadungeon campaign is going swimmingly well, the family gamers love it and the regular gamers are putting up with it, but I need a bit of horror.  For myself.  The regular game is high fantasy and whimsy and adventure, but at I least I can write some horror adventures on the side, right?  It's a necessary outlet.  In this way, the steaming jungles of Isla Mysteriosa and the shade-haunted ruins of Xibalba are taking shape.  It looks like we're going to Gencon this year and I'll probably run some games instead of playing wall-to-wall Magic like last year, so maybe I'll try to premiere it  at Gencon.  That would be pretty sweet.

So anyway - back to the pirates.  Historically, they rove around on these ships that have been gutted to maximize their space for cannons, made flush fore and aft, and rigged for speed.  Larger ships could have a hundred or more pirates hanging on to them, clutching various pointy weapons and shooty weapons, and some of the legendary prizes featured astronomical treasures - a few hundred thousand silver pounds.

Indulge me a second in some game discussion.  Let's say your hypothetical pirate crew (mostly 1st level men or zero level men) capture one of these rich prizes and earns 300,000sp - using the silver standard, where 1xp = 1sp.  if there are a hundred of them, they've each earned 3,000xp.  Cha-ching.  All those surviving zero-level guys become 1st level fighters, and the 1st level crewmen get to level 2.  Experienced pirate crews could be pretty tough, don't you think?  Famous buccaneers like Henry Morgan, who earned millions of silver pieces over his career, would be high level fighters indeed.  Sounds like a game setting.

I'm raising this because players, being what they are, might realize that the ghost-haunted ruins are a tad bit scary and dangerous, and wouldn't it be cool to mutiny and take over the ship and make ourselves pirates, and then couldn't we go attack shipping for "easy money"?  Piracy is like the ultimate expression of the murder hobo ethos.

The other thing that concerns me is starting the adventure.  How would you adjudicate the following type of situation: the player characters are the mercenary adventurers (ie, jungle explorers) hired by a patron to help find and explore the lost ruins.  There are many NPC's along on the venture in a supporting role, but as the players represent unhinged and desperate men (ie, adventurers) they are bearing all the risk of exploration and dungeon delving.  What would be an appropriate split of treasure between the hired adventurers and the rest of the expedition?

In the world of pirates, articles were written up with fairly even distribution of shares amongst the crew - but everyone had an active fighting role.  Is it reasonable for the patron to split 50-50 with the adventurers doing the exploration?  The adventurers and any NPC's that went on the dungeon excursions would get all the XP points, whereas the patron and folks that remained behind would get shares of money, but not experience.

I'm envisioning a scenario where a wealthy patron outfits a ship and crew, and hires adventurers to be the actual explorers that hex crawl the island and explore the ruins.  This lets you put a first level game out on an island without too much fuss.  Replacement characters can be recruited from the crew, but otherwise the NPC's are meant to stay behind.  It keeps the action firmly in the hands of the players.  But it does force you to consider what kind of agreement should exist between the patron and the desperate adventurers willing to hack through the undergrowth and plunder the lost ruins.

You also need to be prepared for when the players dump the captain overboard, take over the ship themselves, and sail for the shipping lanes, with violence on their minds.  Because pirates.