My Dungeon Has A Dungeon Master

We're still talking about dungeons here at the Lich House - big dungeons.  Dungeons so large they can even be called - dare I say it - "mega"?

When planning the dungeon campaign, one decision the referee should consider regards the infamy of the dungeon and the surrounding area.  Is the dungeon well known?  Have other people tried to explore it before the players?  There is a different set of assumptions required if the dungeon has never been plundered, existing like a closed ecosystem, ship-in-a-bottle or monster zoo awaiting discovery.  I usually go the opposite direction, and assume the dungeon is well known, legendary, and that plenty of other people have been there first.  I assume the player characters are desperados that have flocked from across the civilized lands to the frontier to try test themselves against the big bad dungeon and see if they can do better than those who came before.

Consider the opportunities that arise by taking this approach.  Because the dungeon is legendary, actual legends about the dungeon exist as player knowledge.  There are rumors to hear.  Old timers in town can relay things about the dungeon.  There are probably maps regarding the common entrances that can be purchased.  Large dungeons nearby are good for business, assuming the monsters don't rampage around the countryside.   I usually put a whole economy in the frontier town around servicing adventurers.   The Black City had the nearby Viking camp called Trade Town, and Taenarum isn't far from the fishing village of Psammathous Bay, which despite its isolation, boasts an adventurer's guild hall and a steady influx of freshers arriving by ship from Gythium, the nearest port city.

But if the players aren't the first adventurers to attempt to plunder the dungeon, there are some problems to resolve.  From whence comes the new monsters to replace the fallen?  How is treasure getting restored?  Wouldn't all the traps and tricks already be triggered by previous groups? 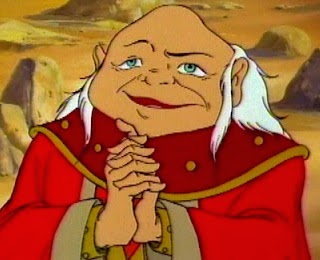 I usually try and put a literal "Dungeon Master" into each of my games - a malign figure that's making sure the dungeon stays deadly.  It's an attempt to put a rational explanation behind all the weirdness.  The Dungeon Master usually has his or her own purposes over and above killing player characters, and can even show up from time to time as an encounter.  It's great fun.

In Harrow Home Manor, there is a mysterious cowled figure called The Caretaker - the worm-ridden remains of a Hyperborean wizard - who treads the spider-webbed halls of Harrow Home and makes sure the guards and wards stay intact.  The Black City has the "plasticals", rubbery artificial life forms that looked a bit like grey aliens, usually carrying wrenches or toolboxes.  They serve the large artificial intelligences that run the engineering beneath the alien city.   The AI's themselves manifested 3-dimensional holograms and appeared like 'gods'.  Taenarum is maintained by Lord Skothos and the Eidelons.  Let's meet them.

Eidelons are spirits of the dead empowered by Hades to return to the surface world for specific jobs.  In Taenarum, each level of the dungeon is overseen by a different Eidelon - they have pompous and overblown titles like the Lord of Bones, the Ghoul King, or the Prince of Darkness, and each commands a different type of undead.  The position of Eidelon is competitive.  Each one wants to send the most souls down to the Underworld and get a promotion to the next highest position, displacing a rival.  The lowest Eidelon is the Lord of Bones, the commander of the skeletons.  Whenever adventurers destroy the reigning Lord of Bones, a larva crawls out of the nearest Stygian well within a few weeks and assumes the mantle, becoming the next Lord of Bones.  Ditto if a higher ranking Eidelon is destroyed - everyone else gets an upward promotion, and a new Lord of Bones wriggles out of the Stygian well.

The Eidelons are responsible for setting death traps in their areas and ensuring there are pots of gold to lure adventurers to their doom.  The wealth of the Underworld is legendary and endless, so there is no lack of replacement treasure ferried around the dungeon by other servants of Hades, the furies or the devils.  In addition to various undead, the Eidelons are served by dark dwarves and kobolds.  Kobolds in the setting are small animated manikins with dog-skull heads who set minor traps and supplement the clean up crews.  The dark dwarves revere Hades as Pluto, lord of wealth, and are given free passage throughout the dungeons in return for occasional services rendered.

Major construction and creation of powerful and deadly magical effects is left to Hades' favorite servant, Lord Skothos the lich. Lord Skothos dwells in a palatial sanctuary on dungeon level 10, dreaming of new and more horrible challenges to bedevil adventurers.  He also summons unique and powerful monsters from the Underworld as necessary and places them around the dungeon.  He's like an undead  version of The Joker or Arcade (from Marvel) and Taenarum is his personal Murderworld.  Lord Skothos is Walt Disney's undead evil cousin, a D&D version of the Jigsaw Killer.  He can be encountered anywhere in the dungeon as a wandering monster when conducting inspections, and is glad to speak with any adventurers that can bear his undead presence (although he gets frustrated by low level adventurers that are paralyzed with fear and can't participate in a conversation).  He likes to pick up first-hand feedback from adventurers who have survived nearby traps so he can improve them for the next group - or demote the nearest Eidelon for incompetence.  It's the dungeon version of the customer satisfaction survey.

I wonder if I should take the amusement park analogy all the way for Taenarum.  Perhaps there is an operations center near the palace of Lord Skothos where kobolds and Eidelons monitor different aspects of the dungeon.  "Drat, that stupid player character thief disabled another trap in sector 3.2.  Better dispatch a work crew to fix it before another group heads that way.  Oh - and someone put a large bounty on the head of this 'Black Dougal' character.  I'm tired of that guy disabling our traps.  Let's get him with a poison needle or something."  Escorting monsters to their new lairs, resetting traps, replacing treasures, and hauling away the bodies of dead adventurers - all in a day's work.  It's D&D's answer to Westworld.

Next time you're approached by a solitary cloaked figure while trudging down some forsaken hallway in one of my dungeons, be warned - it could be the Dungeon Master!
Posted by John Arendt at 5:11 PM