Here are my game notes from the first mini dungeon - a glance behind the curtain into Beedo's workshop.  My approach to Taenarum 2.0 is to create a megadungeon assembled from little mini dungeons like this one.  There are a number of characteristics I'm targeting by assembling the dungeon from mini areas:  they're very modular; easy to sketch, map, and write; each one can fit into a single night of play (important!); each mini dungeon is themed to create a lot of variety from place to place.  There are story points, quests, and other connectors between mini dungeons, as well as quests and rumors in town pointing to them.

Since this is an entrance area, this one is sparse and mostly empty.  You can read the player's side of things in the first two game reports:

I took a few minutes to polish my notes to make them sensible for the blog - my play notes are usually just sentence fragments and jotted phrases.  It's a lot more work to make notes readable versus providing enough fragments and memory joggers to run the game! 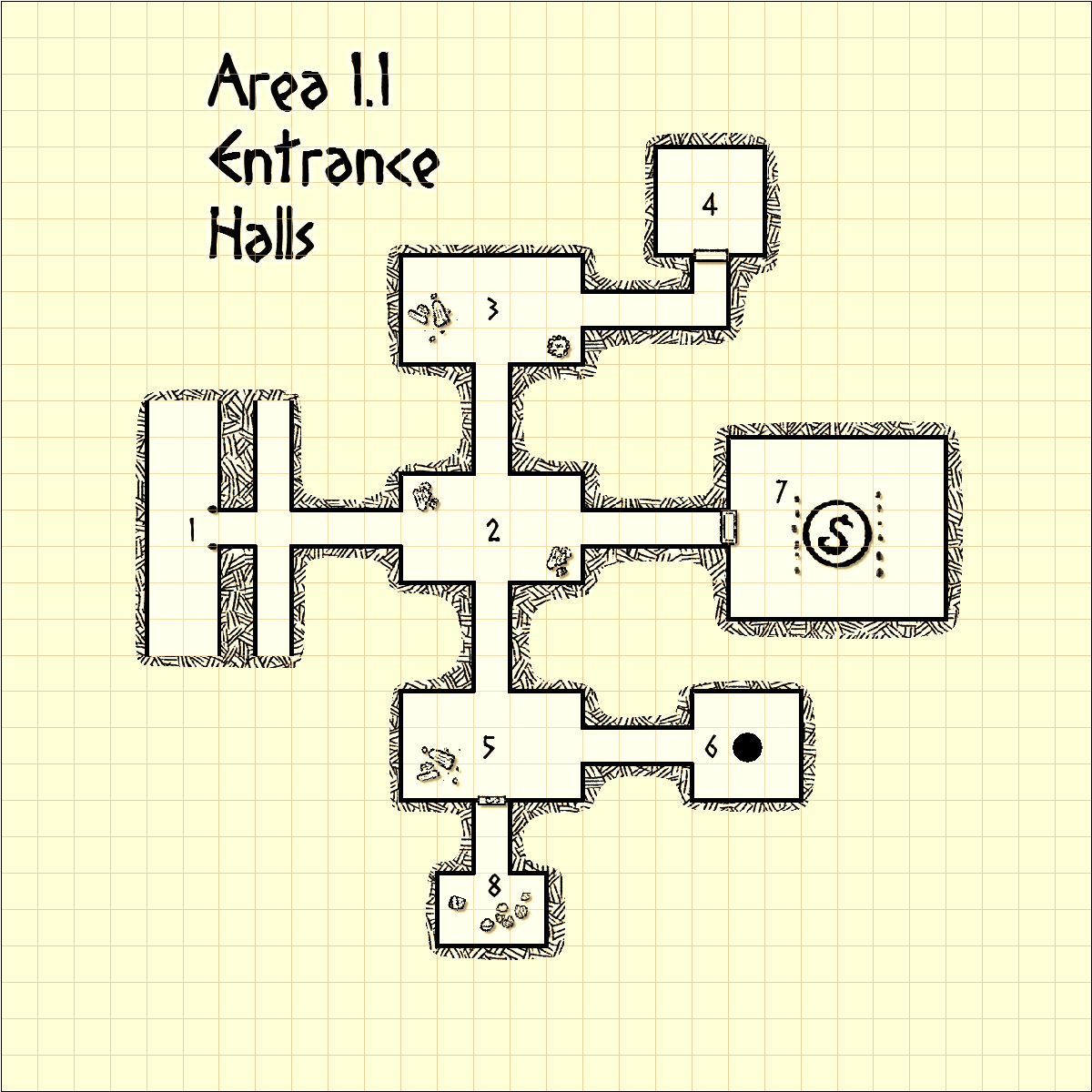 1.  Entrance
-------------
A blemish on the nearby wall on the main road belies the presence of a permanent magic mouth, with ghoulish black teeth.  A decorative arch identifies this area as a dungeon entrance.

When approached, the mouth triggers and speaks:

Eidelon and key rewards
with treasures from the death god's hoards;
In order to conclude the quests,
You'll need to find the seven chests.

Welcome to the Underworld.  May you find what you seek.  Muhahaha.

The laughter then echoes through the halls (good time for a wandering monster check).

2.  Graffiti Room
------------------
There's a trip wire set up in the passage right before the room - it's attached to bangles of metal in the room that chime and alert the bandits.  The smell of a cookfire drifts from the north passage.  The room holds rubble from smashed statues (wings and bones - winged deaths).  There is graffiti on the walls (mostly written in charcoal or chalk).

Diodoros sleeps with the fishes.
Spartans rule, Athenians drool.
Pythios pwns you.
For a good time, ask to dance with Melantha.
If you find my head, let me know.  --Orpheus.
Don't eat the pomegranates.

3.  Bandit Camp
---------------
A group of 5 bandits camp here - 1 is on watch and listens for the chimes.  There's a cookfire, basic supplies, some firewood.  They have incidental treasure.  If alerted, 2 flank the hallway with spears to ambush anyone entering the room, the rest retreat to the corners with bows to shoot at the entrance.

4.  Bandit Captain
-------------------
Tobias, the Bandit Captain (use CR 2 bandit captain stats).  He's handsome, with silky hair, but he's terribly unlucky and curses the fates - he lost his love to the book of blessings and curses, and now forces captured adventurers to 'roll the dice'.  He's willing to spare spare anyone that takes on the Triad (room 7).

The room is lit from a pilfered soul gem (in the place of a torch).  He has a bed, trunk, gear, writing table, wine and cheese - some back story of his lost love is scrawled in a diary.  There's a potion of healing and 125gp in art objects in the room.

5.  Abandoned Camp
-------------------
The room has the remains of an old campfire, some discarded gear, and another ruined death statue.  Old basket with a treasure map stuck in the side of a discarded basket (it shows areas 1.2.4 and the wall cache there).

More Graffiti:
She can see you.  Don't look.
I left my harp in Sam Clam's Disco.
The Lord of Bones guards the first box.
Cylons look like people, but only 7 are known.
These are not the droids druids you're looking for (added by the players)

6.  Big Stone Head
-------------------
A monstrous stone head fills a ten foot space here.  Any time the head is disturbed, on a 1-2 out of 6 the nose exhales a Fear gas.  Carved into the forehead is a piece of text in the Olympian language of the gods and primordials, the word "Forsaken".  If anyone speaks Olympian in the presence of the head, it spits out an enchanted soul gem (empty) - once (see the notes on soul gems).

The head is covered in runes (arcana to decipher) - the writing is god script and implies the head came from the Titanomachy, the legendary war against the Titans.  It's a reminder that many of the Titans are imprisoned by Hades in Tartarus.

7.  Triad of Fates
-------------------
There's a stone door embedded in a post and lintel with no obvious way to open.  Symbols and letters covering the whole alphabet are etched into the post as buttons.  Depressing the (worn) letters that spell FATE opens the door (it slides with a rumble into the wall).  Magic torch light flares into life along the walls of the room.

The room is dominated by a large statue depicting the three fates (Moirai).   Clotho (spinner), Lachesis (allotter) and Atropos (unturnable).  They carry book, staff, and scale.  A brazier near the base illuminates a stone table with the Book of Blessings and Curses - consisting of a series of bronze plates attached to the table like a book.

A lingering Ghost (an athletic looking female, with grey eyes) lingers in the corner.  She lost her life at the hands of the book and now lurks in the room with unfinished business.  If anyone doesn't try to read their fate in the book, the ghost attempts a possession.  She'll move on to her reward if her possessed victim takes on a curse and survives the Fates.

Anyone who attacks the statues or attempts to damage the book... Save vs Disintegration.

8.  Medusa Mural
-----------------
The room has a few petrified remains of dead adventurers.  The south wall is a lifelike mural looking into the lair of the Medusa (the room beyond looks like a crumbling Greek temple in a cave).  She can see anyone in the room and petrify through the looking glass - there's a 1 in 6 chance the Medusa is nearby and moves to peer through the mural if there are lights in the room.  There are sigils along the mural border that identify the sequence to a teleportation circle, allowing fast egress to the level 8 Medusa Temple for high level parties.
Posted by John Arendt at 9:56 AM