The rate of advancement in the latest edition is governed by encounters, so the first thing I tackled when developing my current campaign was to identify the expected number of encounters per level to get a sense on pacing and size (some of the raw numbers are here - the 5E lollipop).  Treasure has been a secondary consideration, but I still meant to look at - let's do it now, yes?

In older games, something like 75% to 80% of a party's experience came from treasure.  One gold piece equated to an experience point (1 gp = 1 xp).  Monsters and fighting weren't worth a lot of XP relative to how the new editions treat fighting.  The 5E fighter would need to defeat 3 orcs in single combat to earn level 2; the 1E fighter would need to defeat 200 of them.  Ideally, he'd figure out how to rob them instead of fighting them!

Of course, all of that dungeon gold causes other problems, because the players aggregate tremendous amounts of wealth - campaign warping amounts.  Here's a table I've used to gauge how much money the players would drain out of a gigantic, 10 level megadungeon - I used the OSR fighter as the blended average for XP requirements, and assumed 80% of that experience is coming from gold, to create a cumulative total for the gold that needs to come out of the dungeon. 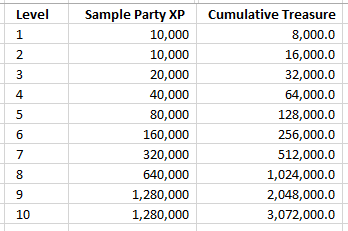 The latest edition is a lot more nonchalant about gold and treasure in general, since it doesn't appear to do anything other than, you know, buy mundane stuff.  In 3.x and 4E, gold was critical to buy magic items, and those items were important for the players to stay on parity with the monsters they'd be facing.  That's no longer the case.

In 5E, the DM Guide has guidelines on creating treasure hordes and expectations on how many hordes the players would recover per tier of play.   I put the chart down below - here's how to interpret the columns - by level 2, the players should have recovered a single hoard, the base value of a 'heroic tier' hoard is 376 gp, and from there you can see how I got to the total treasure the players are expected to recover per level, and their cumulative treasure for their careers.

Of course, your mileage may vary, and since treasure is detached from the experience system or magic economy, there's really no harm in being above or below the curve. The suggestions in the 5E DMG are just guidelines.  I did the comparisons just to get my arms around how the systems vary in expectation - but also because I wanted some actual numbers to help me populate "The Scoreboard" for Taenarum 2.0.  (Yes - my dungeon actually has a scoreboard so the players can see how they're doing relative to rival adventurers - they track gold earned back in the Adventurer's Guild).

I don't love the hoard system, but it's certainly simple to implement, and it follows a theme of making things easy on the DM.  5E is easy on the DM all over the place - compared to other recent editions, it's rather delightful to run, very reminiscent of the beloved BX.  But we've lost some implied world building by abandoning all those baroque treasure tables from AD&D, in lieu of generic hoards by tier.

Anyway, I found the evaluation super interesting - the OSR party will accumulate several million gold pieces by the time they reach 10th level (the table above has that number near 3 million).  The 5E party will have gathered somewhere near 80-90,000 gold to get to 10th level.  A little different in scope, huh? 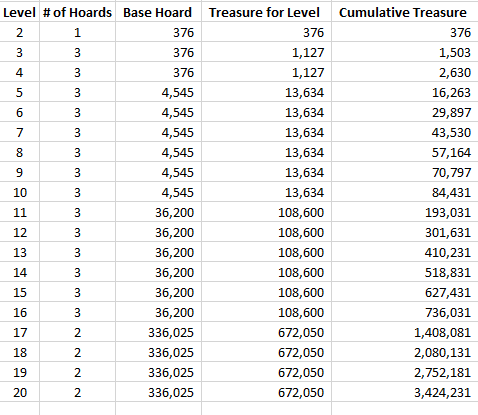