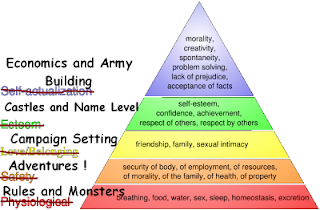 Some things over the weekend got me thinking about where D&D and the OSR thing is going.  Folks have noticed that rules guys are moving beyond retro clones to keep the old games in print; designers are publishing new formulations that aim to smooth over some of the rough spots, incarnate common house rules into the base rules, or otherwise reflect the writer's take on the genre.  More rules are fine, but I'd also like to see the creation of more tools to help the DM run a better game.

The hierarchy chart is how I want my campaigns to go - start with a rules set I like and some monsters I like.  Present compelling adventures.  The setting isn't that important if the first two needs aren't met, but once you've got the basics out of the way - yeah, it's good to have a nice setting with some history and depth.  Then the goal is to see a campaign live long enough to reach name level.  The 1970's rules have some support for castle building and attracting followers, but it's limited - it's hard to go further and reach that pinnacle of the pyramid without making up a whole lot of stuff.

I used to love Mentzer's BECMI because it was an all-in-one system that included army building, mass combat, naval warfare, sieges, and economics, but then I realized my campaigns don't last more than a year or two on average, and no one was getting to level 36.  And the economics are a bit off.

Domain level play is an end goal each time out - I've talked here about converting all the Greyhawk armies to War Machine and statting out some of the nations with the dominion economic rules (I only got as far as Sterich for the current campaign).  The ghoul war has been played out using War Machine - so even in Gothic Greyhawk, I have that end-game in sight.

Isn't that how we should view a campaign - start by making sure the basic adventuring needs are met and the game runs well and folks are having fun, then focus on the long range goals - building out the setting and providing a framework for the players to seize ruler ship?  After all, Kings are for Killing.

As I look out onto the OSR publishing landscape, it seem like folks are starting to move up the pyramid with their projects.

Taking a look at my book shelf, here are the products I see on it that light up the pyramid for me - you've got 2nd generation rules items, like the LOTFP game or supplements like Realms of Crawling Chaos.  For adventures, my reviews page has a number of things in the 4-5 star range that have broken new ground and demonstrated some OSR muscle.

How about campaign support products?  I'm seeing lots of cool hex crawl books.  I liked the random ruin hex generation in Lesserton and Mor, and the urban crawl rules in Vornheim.  I seem to remember the Dungeon Alphabet just got an award, too.  I still keep Kellri's huge compilation of random encounter tables and NPCs handy.  So there have been some tools that support campaign play.  I'm not recalling any new settings that lit the world on fire, though.

I don't know that any other recently published rules have taken on the economics of D&D, yet, which is the lynchpin to getting army building (and ultimately mass combat) to work as a game element and not a story element.  Economics seems like a rabbit hole.  Every once in a while I check in on the Tao guy's place and see that he's still building spreadsheets that calculate the price of imported walrus tusks from Greenland to Central Asia in the 17th century, down to the penny, and I despair.  Oh that way madness lies, says good King Lear.  Or at least, if I tried to run my campaign with that level of detail, I'd lose my job and be divorced for neglect.  Perfectionism or OCD, right there.

What are you guys seeing as far as new projects out there that are developing campaign supplements and tools?  I'll be following the progress of the Domain Game effort over at Hill Cantons and the ACKS game over on the Autarch blog (Adventurer Conqueror King).  There's a trade off between minimal bookkeeping and abstraction, and realism.  If you go for minimal bookkeeping and abstraction, you get War Machine and the Companion set economics approach.  Or you could have oodles of spreadsheets calculating free market commodoties from the 17th century.  Not an easy balance to maintain without making the game Papers and Paychecks.

Seems like a good time for a poll.  How far up  the hierarchy of needs do you focus your campaigns?
Posted by John Arendt at 6:40 AM