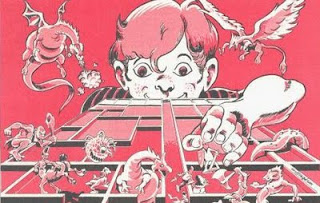 Simon over at And the Sky Full of Dust was asking what makes a good megadungeon.  There are some stock answers around making a good dungeon (any dungeon), but to make a dungeon work as the focal point of an entire campaign, it needs a bit more to have longevity and stay interesting.   What follows are the ideas I hope to implement as the Black City project moves from the ruined city down into the actual dungeons; they're the synthesis of ideas seen on various megadungeon threads (especially over at Dragonsfoot) and lessons from running Stonehell last year.

Regarding the physical structure, it should be large - essentially too big to finish exploration or completely map (or with levels so large that the party chooses to go deeper before completing a level).  There are a couple of approaches I've seen.  One is to have extremely large graphed levels - like what you see with Stonehell's quadrants or the sprawling levels of the Castle of the Mad Archmage.  Another approach is to go with modularity - the ability to add in or remove levels and sublevels - something like Yaqqothl Grimoire's dungeon notebook built of one-page dungeons.  Regardless of approach, nature abhors a vacuum - so when players clear out an area and move on, the cleared areas will begin to repopulate.  The megadungeon DM needs to restock the dungeon (and the megadungeon design and back story should support restocking options).

In addition to large horizontal levels, the megadungeon should be vertical.  The levels below the first get progressively more dangerous.  Challenges should operate in multiple dimensions - some difficult encounters and combat challenges, situations that require problem solving, stealth, role playing and puzzles.  The size of the dungeon, along with tricks like slide and traps, should challenge the player's resource management.  There should be chokepoints that force the players to encounter certain areas or travel certain paths, and hidden levels and sub-levels off the main path that provide a sense of discovery.  There should be highways in and out of the dungeon to expedite future exploration and minimize future grind.

The levels should be designed to have some set pieces, named locations, or other quest-objects that are worthy of identifying as missions or destinations.  Treasure maps have a role here in providing quests, destinations, or ingress into hidden areas.  And some of the things found in the dungeon should lead to side quests in the wider world!  A related idea to set pieces is to have themes within the levels so that the different levels feel distinct from each other - the fungus level, the volcanic dungeon level, the haunted level.

The DM probably has some ideas already on stocking based on their themes.  I like to use the Moldvay stocking charts for percentages of encounters to empty space.  I like to see a 25-33% encounter density to provide a lot of room for exploration and travel.  One thing not to overlook is the use of named NPCs and factions within the dungeon.  These types of encounters allow some role playing, strategy, alliances or enemies, safe havens, and the gathering of information.  I also like to have multiple adventuring groups in the dungeon for all of the same reasons - including the development of rivalries with the players.

There is an end-goal for all of these elements, and this is where writing the megadungeon crosses over into running it and playing it.  The megadungeon needs to support informed player decisions.

Think about a few classic tropes - gold as XP, or dungeon level = danger level (and character level).  Both of these tropes provide a basis for the players to make decisions about the type of risk they want to undertake when planning delves into the mega dungeon.  But there needs to be  a lot more information - the players need to be able to learn about set piece destinations or named locations in the dungeon and plan missions.  They need to be able to learn rumors, or overhear other groups in the tavern back at town talking about their own expeditions.  One of the biggest reasons to include NPCs, factions, and rival adventuring groups, is to create a flow of information about the dungeon, so the group can make better decisions.

For the megadungeon to act as the main setting for the entire campaign, it's paramount that the players want to return again and again.  It needs to strike a balance between maintaining interest through mystery and the unknown, on the one side, and providing enough information for the players to plan and make good decisions about upcoming treks into the dungeon.

Finally, I like to have patrons back in town that know a thing or two about the dungeon and might hire the characters or otherwise share information - another source for missions or quests.  The ideal is to allow the players to gather information using their own faculties, and plan their own missions, but be prepared to introduce a few external plot hooks if the players draw blanks - especially with players new to sandbox play.

If I were to boil it down to a list of bullets, here's what *I'd* have: