Fear in a handful of pages... 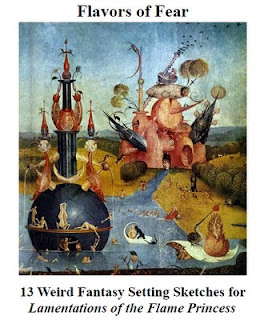 Chances are you've already seen this collection promoted on another site, but if not - go ahead and get 13 Flavors of Fear, a free download that contains over a dozen campaign setting ideas for a Weird fiction game (a couple of download options are in the RPG net post).  Get it, read it, be inspired.  Jack and Jeremy did an awesome job.

I already want to create a mash-up of a number of sub settings in a macro-setting.  One of my ideas for the future is to do a weird horror/Rome type setting like Cthulhu Invictus (or just convert Invictus to D&D).  I'd borrow heavily from the Weird Rome here in 13 Flavors of Fear, and then build out a few borderlands areas where the Weird is encountered more directly.

On the northern frontier - perhaps border encampments on the Rhine in the dark woods of Germania, or in northern Brittania along Hadrian's Wall - you could have something like 'The Cold Northern Wind'.  Rome is ideal for the contrast of civilization to the dangerous lands beyond the rule of law where things go bump in the night.

"Behind the Façade of the Seaside Town" could be placed anywhere along the Italian coast or any number of islands in the Mediterranean - Mare Internum Nostrum.  Just why did the ancient Phoenicians conquer sea travel so well?

Legionaries mustering out as farmers to the provinces, and wealthy landowners creating their massive plantations (latifundia), would encounter plenty of indigenous people - as would anyone in a remote trade town or seat of government in the wilds of Roman Europe - providing opportunities for Weird scenarios like 'Pilgrims in a Strange Land' or 'Pagan Outskirts'.

I'm going to file this in the Junkyard so I return to it for brainstorming and development - I even know what I'd call the setting - Terra Incognita.  I love it!