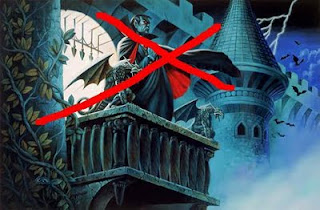 
"We don't stand a chance in the castle without two clerics", began Mordecai.  "You've done your part protecting the village, Father Donavich, but soon there will be no village to protect.  Your best chance of saving the rest of your people is coming with us and helping us to put down the vampire".

Thus began our latest game of Gothic Greyhawk, as the group did a full-court-press with charisma and silver tongues to convince Father Donavich, the parish priest of Barovia, to join their ranks as a heal-bot.  Their words were true (or at least, the reaction roll was a good one!) and soon they were sitting down with their newest member to plan tomorrow's ascent.

If you're a regular reader, you probably saw Monday's "Die Strahd, Die!" and pretty much know that last game saw the death of the big guy himself.  It still might prove interesting to see how they got there.

It started with about an hour's worth of discussion, debate, and planning.  Reviewing inventories of scrolls, potions, and items.  Testing command words for the wand of fireballs until they were blue in the face.  (En Fuego was the winner).  Use of the wand, and discovery that they possessed Dispel Evil, buoyed their confidence.

Here's the plan they settled on.  First, they wanted to find the missing part of Ismark's magic sword before confronting the vampire.  They had a "Locate Object" spell but didn't have a good mental image of the missing piece.  Would a picture or description be available in the castle?  Father Donavich reminded them that the Tome of Strahd, a book he recommended they seek previously, might have such a picture or description.  Could they find the castle's library?

That became the plan.  Find the library or study in the upper castle, then the book; use the book to get a description of the magic sword; use the description to fuel their Locate Object spell to find the missing piece; assemble the sword of prophecy and go find the vampire, armed and ready.

No need to recount the particulars of the journey; once back at the mist shrouded castle, they visited the accountant Lief Lipsiege, to see if he knew where Strahd's library or study could be found.  He had a vague idea how to get to the study, and was willing to direct them (surprised and pleased that they were still alive days after their previous meeting).

Up a dark spiral staircase was a short passage and a pair of alcoves, from which two wraiths emerged out of the shadows to ambush the front of the group.  Both Kobra and Forlorn were level-drained and damaged, but the group quickly responded with magic swords and magic missile spells, and the wraiths were vaporized.

A few empty rooms later, and they found Strahd's study.  A roaring fire burnt in the hearth, and the master of the castle sat near it in a large high-backed chair, leafing through the very book they sought.  "I believe you're looking… for this…" he said, as he stood, put the book on the chair, and faced the group.  "I'm so glad we finally have the chance to speak in a civilized manner".

There was a bit of banter - Strahd recounted how he demanded their "Book of Unspeakable Shame" and would let them leave the castle (but not the valley), alive and unharmed, if they left the book and his bride (Ireena).  For the 20th time, Soap muttered under his breath, "I told you we should have tied Ireena to a tree and left her in the woods".

Once Strahd flashed the hypnotic peepers on Forlorn, who was carrying the Book of Unspeakable Shame, things quickly spiraled into chaos.  Forlorn was wrestled by the nearby fighters, Mordecai dug for the scroll, and the group quickly asked for time-out for table talk.  Could this be the real Strahd, they asked themselves?  Should we burn the scroll and risk it?  It might be our one chance.  Etc, etc.  The die was cast; Strahd lost initiative, the spell was read, and the rest is history - Strahd failed his saving throw, and the centuries old vampire was reduced to dust.

Stunned by such a surprising turn of events, the group rifled through their sheaf of scrolls for the one with Commune.  Mordercai asked the higher powers if the vampire was indeed destroyed… and the answer was YES.  Cheers erupted around the table (the 9-year olds were out of their seats, pumping fists like their team just won the Super Bowl) and high fives went all around.

Meanwhile, while searching the room, they discovered the magical hilt to their sword of prophecy was in the study all along.  Soap used a detect magic wand to find it, and the sword reassembled magically in front of them and became the Sun Sword.  Better late than never?

It was a Sunday (work the next day) so we stopped there.  It's been an interesting week on the blog discussing the turn this game has taken, and I'm looking forward to what the players do next.  Everything they've done up to now has been about getting the magic sword back to Barovia.  That quest is done, and the master of the castle is gone, and the next phase of the campaign is wide open.  Do they clear the castle, in an effort to recover treasure?

I have no idea what we'll be doing.  Well, I have some ideas, but who knows what they'll actually choose!