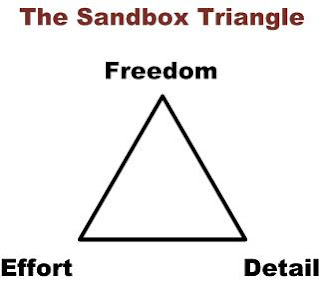 Yesterday's post on Sandbox vs Story created a lot of discussion.  The basic thesis was this - for my style of old school play, it means using a rules-lite system and running the world like a sandbox.  Not all games support the style - some are rules heavy, some require a heavy DM hand to guide a plot.  Part of it could be genre.  Can you run a sandbox in a modern setting?  Can you structure a mission-oriented sandbox for spies or supers?

To advance the discussion, I want to draw two definitions - sandbox as structure, and sandbox as technique.

Sandbox as Structure
The sandbox is a way to structure information about your campaign.  Most bloggers writing about how to build a sandbox are using it this way - sandbox is a noun.  For D&D, the basic sandbox might include a home base, a hex map, encounter listings, a few adventure sites, lists of NPCs, and maybe some helper tables - wandering encounters, rumors, things like that.  Sandbox as structure.

Sandbox as Technique
Sandbox as technique begins the moment you start playing - now the DM needs to present the sandbox.  How do you run the sandbox at the table?  For me, that means having NPCs introduce plot hooks, and having a schedule of events and timelines.  The overall goal in running the sandbox is to present information so that the players can make decisions and interact meaningfully with the game setting.

Those are my definitions - I've said before, there are lots of online guides on building a sandbox, but not as much advice on running one.  One thing I'm hoping to achieve with the Black City manuscript is putting some of my home-game techniques on bringing it to life, down on paper.

The Sandbox Triangle
There are some interrelated elements that provide constraints on how one structures and runs the sandbox.  You project managers out there are familiar with the Iron Triangle - time, quality and scope.  (Sometimes folks will refer to 'fast, good, and cheap - pick two' as a similar construct for products or product development).  There's a balance between the three points of the triangle - enriching one area will mean losing something somewhere else.  If it's fast and good, it won't be cheap; if it's cheap and good, it won't be fast, that kind of relationship.

For gaming, the Sandbox Triangle is Effort, Detail, and Freedom.

Freedom
The more choice and freedom the players have to go anywhere, the more effort the DM needs to put into the setting, and the less detail on any one area is feasible.

The more the DM constrains player choice, less effort is needed to provide more detail.  (Adventure Paths are intricate and deep, or lazy - a few linear scenes can be sketched out literally minutes before game time).

Detail
To provide a lot of setting detail, effort needs to go up unless freedom is constrained.

Effort
To keep effort low, the DM needs to provide scant detail for a wide area, or provide deep detail and constrain the coverage by limiting player choice.

Back to Sandbox vs Story
There seems to be a misconception that in a sandbox the world doesn't change without the players interacting with it - the sandbox is passive - a quantum Schrödinger's box where the off-screen actors freeze when the spotlight moves to a different part of the stage.

When I run the sandbox, I do have events and timelines and elements that could be called "story" running in parallel with the player's actions, but the level of detail I put into those depends on player choice.

Let's contrast two adventure structures.  A story DM prepares a number of scenes for his adventure path or scene-based game:  Scene A -> Scene B -> Scene C.  The sandbox DM prepares three adventure sites - Site A, Site B, and Site C.  Effort for the two games is similar at this point.

However, as long as the first group is willing to go to Scene A, and be led or follow the hooks to B and C, none of the DM's effort is wasted.  The players have sacrificed some freedom of choice.

In the second example, if the players go to site B, site A and C could go unused - especially if B leads down a different series of choices - B -> B1 -> B2 etc.  Maybe B is the first level below the old monastery, and choosing to explore B lets them discover deeper levels below the monastery too.

Not only can sandboxes waste some DM effort, but it can be a lot to keep up with!  That's why I use a lot of published modules that are presented as adventure sites; I can seed them into the sandbox with minimal effort, and only invest time into preparing them if the players choose to go after those plot hooks.

The other mitigating factor that can help limit effort in the sandbox is one of those "social contract" kinds of things.  If the DM wants to invest an inordinate amount of prep time into something, he'd be pretty chapped if the players blow it off in the name of "freedom of choice".  So it's good to have out-of-game conversations to establish agreements.

"So, you guys have a number of choices in front of you - which way do you think you'll go next week?  Oh, back to the old ruins?  Good, that gives me an idea what to prepare…"

Okay - I really enjoy these blah blah blah theory posts, but next week I need to get back to some stuff on the Black City!