Mythic Monday is about taking elements of folklore, myth, and legendry for use in your games.  Most of the time the focus will be on monsters, but in honor of the weekend holiday, I'll take a look at New Year's Day.
First off - you do have a calendar in your game, right? "You can not have a meaningful campaign if strict time records are not kept", or so says the boss.  (DMG p37)  You need to track the passing of time for the characters, and if you're doing that, the next thing is to populate the calendar with holidays - holy days - observances, and feasts.  Most of the holiday traditions practiced in the real world have an origin in ancient times, and most of our games are placed in those ancient times when the observances carried much more significance.  Don't ignore them.  They add flavor, culture, and verisimilitude to your game, and if you treat them seriously, observances do as much to bring the game world to life as any number of NPCs.
Whatever approach you take for a calendar - most early calendars were lunar or solar - you'll need to establish when the cycle starts again - which brings us to the New Year.  When is it?   Many ancient calendars started a new cycle around harvest time - the Hebrew new year is in the fall, the Celt's divided the year into summer and winter.   Early Christianity and the Middle Ages used a March new year (March 25th, the purported time of the annunciation), but eventually went back to Jan 1st, same as the Roman Empire - the consular new year.
I like the idea of 'hand off of responsibilities' as part of the New Year - it's an element in many cyclical traditions.  In Celtic lore, the Seelie court gives way to the Unseelie court for the next cycle; Father Time (Chronos?) anoints a Baby New Year; Dionysus is reborn, or Persephone returns from the underworld.
Add some customs and traditions to your New Year holiday - noise and fireworks drive off evils spirits and demons.  Special foods are eaten to encourage wealth, prosperity, and good luck.  If the New Year is the dead of winter, keep the fires lit - put in a yule log tradition and the need to keep it lit.
Finally, in  a world with magic, the supernatural, and the presence of great powers, I'd make a New Year's birth something prophetic or important.  A child born on New Year's Day could be touched by the light or dark magic, holy, or chosen by the harvest  or fertility gods if the day is in the autumn.  Such a newborn might be in danger of kidnapping, in need of protection from spirits or fey abduction, or requiring escort to the temple; any number of simple adventure ideas could be applied.
Putting It All Together
Here's a twist on the New Year celebrations that takes all these elements, dumps them into the soup, stirs the pot, and gives me an approach that would work well in a supernatural horror setting like Gothic Greyhawk.
In Gothic Greyhawk, folks make noise, ring bells, stoke the hearth fires, and set off fireworks (if available) on the midnight of the New Year because evil spirits *do* roam the countryside during the witching hour.   The ghosts and spirits of the damned are free to wander the earth until the cycle begins anew, and the next Jailer is anointed. 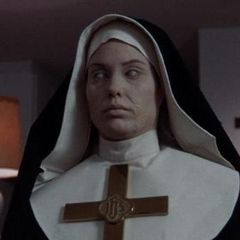 A small (and secretive) sect of monks within the holy church is responsible for anointing Hell's Jailer.  The Jailer performs a year-long vigil in a lonely tower, keeping watch over the doorway to Hell.  (There was a campy 70's horror movie that had this theme - The Sentinel.  Burgess Meredith was the devil!  Oh, and being the sentinel made you blind... see pic on right)  At midnight, or the witching hour of the following year, a new member of the order takes the vows and goes through the hour long investiture ceremony; but in that gap, all manner of foul spirits are free to assail the living; the Damned are driven off by the sound of church bells, and it's common for bells to be tolled for the entire hour across the land.
Children born on New Year's Day are sacred to the order of monks that raise and train the spiritual warriors capable of taking on the lonely vigil as a Hell's Jailer; special envoys of the church are known to travel the lands of the Realm seeking news of children born on this auspicious day.
Of course, agents of the Adversary seek them also.
Posted by John Arendt at 10:17 AM