The Shared Experience of Modules 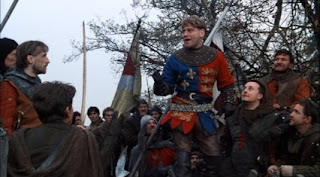 And gentlemen in England now-a-bed
Shall think themselves accurs'd they were not here,
And hold their manhoods cheap whiles any speaks
That fought with us upon Saint Crispin's day
Since publishing my campaign recap of Death Frost Doom, a few folks have posted in the comments about how it went in their own campaign, or that they're looking forward to running it themselves.

One of the overlooked benefits of running a published module is having these shared experiences.  When a lot of us started in the hobby in the 1980's (in some cases, even the 70's) TSR was the only show in town; their modules got heavily played.  One could argue JG had a few classics as well - Tegel Manor, for instance.  Most everyone has a Keep on the Borderlands story, or a Village of Hommlet or White Plume Mountain story, or even a Tomb of Horrors story.  Most gamers could tell war stories about what happened the first time they met the captured Medusa prisoner in the Caves of Chaos.

WOTC had a similar thing going in the early days of 3x and even 4E when everyone knew who Meepo was, or could relate how they got TPK'd by Irontooth.  (If you don't know either of those characters, well, good job.  Ignorance is bliss and all that.)

So I'm left with two thoughts - first, this shared experience is another benefit of running modules.  Sharing the war stories.  Building on the Sandbox of Modules, my defense of modules continues.

Second, would Death Frost Doom be the first OSR module that's really developed a community of shared experiences?  I still need to go back and catch up on some of the OSRIC stuff - I would think Pod Caverns of the Sinister Shroom might seem to get some mention as well.

Would love to hear thoughts and comments.
Posted by John Arendt at 1:52 PM