Got back yesterday, starting to feel normal today; we drove all night Saturday and didn't get too much sleep yesterday.  Got in some good D&D games at Gencon, played a bit of Heroclix, and bought stuff.  The usual.

Just getting to Gencon was an exercise!  We had planned on  leaving around 9pm Wed, driving through the night, and getting to the convention Thursday morning with enough time to get oriented.  Work problems with one of the guys put us on the road later than we wanted (10:30pm) and then a huge accident and hazmat spill on the Pennsylvania turnpike shut the high way down for almost 4 hours.  We were stuck about a mile back from the spill, totally penned in by trucks, and way too far past the previous exit.  It was surreal, walking around the highway at 2am amongst rows and rows of shut down trucks and cars, while the emergency lights and work crews cleaned up the spill just up ahead.

My first Thursday game was set for 1pm, and we rolled into the parking lot of the JW Marriott right at 1:05pm.  I had my badge sent via Fedex in advance, so I didn't need to do will-call; motored up to the room and got my first game rolling 5 minutes later.  That's the way to get thrown right into the middle of things!  That gave Mike and Bo a chance to check in to the hotel, get their badges at will-call, and visit the dealer area; we met up later for dinner.

I was able to run two sessions of the Spire of Iron and Glass, as well as Joseph Browning's Obsidian Sands of Syncrates.  The games were a lot of fun, I took down some notes along the way, and will write actual game reports / mini-reviews this week.

The OSR booth was really well done and had a prominent corner along one of the central aisles; I hope it did well!  My contribution was getting a copy of Anomalous Subsurface Environment (ASE) and Red Tide.  I've been following Pat's game reports about ASE and love the tone of the dungeon, so I'm really looking forward to reading it.  Red Tide is an intriguing campaign idea, and I know the Sine Nomine guys did interesting things with sandbox structure in Stars Without Number, so I'm looking forward to seeing how it works in D&D.  Reviews for both should be forthcoming.

Wizkids and Heroclix was a disaster.  There's like a 400 post complaint thread over on the HCRealms main board on everything that was wrong about how the events were being run the first few days; no need to rehash it here.  By Saturday, they finally had a workable system for running events and I was able to play in a couple of them (which I luckily won) snagging the convention exclusive versions of Wonder Woman and Moonstone.  But it killed the day.  I did get some figures and maps in the dealer room, the whole Watchmen clix set, and a set of game science dice.  No longer need I be a 'crappy dice apologist'.

Mike and Bo got fairly frustrated with Wizkids and split off to check out the ACKS playtest, which turned out to be really good for them.  I had been talking up ACKS and the idea of dropping in on the play test on our ride out to Gencon, so I was glad to see they visited Tavis and the crew - the ACKS guys were super hospitable.  By the time I got over to the Omni, the session broke and folks were gone for dinner.  Bo and Mike came out as ACKS converts.  Mike's a big fan of 3.x and really liked the 3.x style feats that were added to the ACKS mix, whereas Bo likes to know the world has a coherent system behind it, like the economics.  They got signed copies of the version 0 books, and that's pretty much all we talked about on the way home.  I'll be working the economics and campaign play suggestions into Gothic Greyhawk immediately, and running a play test of the character system to see how the feats would work bolted on to BX.

That's my Gencon.  I'll get out some game reports this week, work on some new reviews, and grab Mike's ACKS book for campaign planning once he gets the first read through finished.

Edit:  Added a pic of the Watchmen as Heroclix: 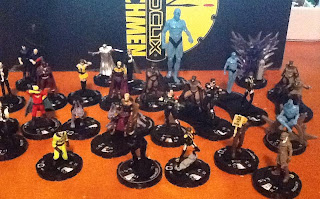