One Ring to Rail Them All…


A recent poll here identified that only 6% of folks like High Fantasy these days for their D&D game.  Why is that so low?  I think much of it has to do with the perception that High Fantasy means epic storylines like the Lord of the Rings.  Epic stories translate into D&D as adventure paths and railroads and Elminster.  Old schoolers don't want to be lead around by the nose.  It got me thinking about the possibilities of mixing High Fantasy and the sandbox campaign style, and that got me reminiscing about the old ICE Rolemaster take on Middle Earth, and the huge number of sourcebooks they published in the 80's. 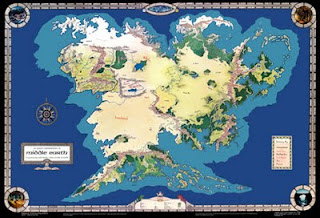 Did anyone else collect these?  ICE created source books that detailed sections of Middle Earth some 1400 years before the war of the ring.  This gave them great flexibility to use Middle Earth names and places, plenty of historical characters, and freedom to turn it into a huge sandbox.  Many things in Tolkien's books are timeless and immortal, and could be encountered in the earlier time period.  The art was spectacular.  The Middle Earth lore was overwhelming, and the text was painfully small.  But an ambitious group of characters could find the One Ring at the bottom of the river, or go into Dol Guldur and take on Sauron (who was masquerading as The Necromancer in southern Mirkwood during that period) - and get promptly obliterated.

I can remember running games where our youthful power gamers looted some of the Barrow Downs near the Shire for ancient weapons, fought a wight or two, had a few beers in Bree, and then went into the Trollshaws and got pummeled by Trolls.  Good times.  Rolemaster (and the simplied version, MERP) was an unforgiving system.

Wouldn't you say ICE turned an epic, High Fantasy setting into a playable sandbox?  Transplanting this approach to Dungeons & Dragons, the DM could write his intricate back stories about One Rings and Dark Lords and blah blah blah, and the players could ignore all of that and do whatever they want - like go looting.

Couldn't you foresee a campaign where the players found a cool magic ring, and then discovered that lots of bad guys were hunting for it because it was, in fact, an artifact?  Through their own choices, the players went to ancient libraries or wise old NPC's and learned that the ring had a history; the players then planned and executed their own quest to "take care of the ring".  The DM sets the table, the players bring the awesome and the epic.

In an Adventure Path covering the same ground, the visit to the Mary-Sue NPC or the ancient library would be ordained by the writer; in the sandbox, the visit only happens if the players make it happen.  If they choose to sit on the ring, hole it up in their tower, take it to the arctic and throw it into the sea, let them do it.

Simple stuff, really.  The DM creates some basic setting elements and puts them in the sandbox:  a ring, some bad guys who want it, and some hidden lore on it's history and vulnerabilities.  Once the ring crosses paths with the players, the unfolding of the campaign is dictated by their choices and the consequences of those choices.  The bad guys will have their own ideas, and they're going to react to the player's actions and adjust accordingly - it could mean declaring war, sending troops on the move, or dispatching a group of 9 black-clad undead riders to go find it.  The sandbox isn't static, and a story will emerge from player actions and the consequences of their choices.  But the sum of the parts is much larger - and far more satisfying to all involved - than if the DM sat down and wrote a scripted adventure path on how he thinks the campaign should unfold.

Looking back at ICE, they did commit a "cardinal sin of the sandbox"; they made it clear that anything the players did that would affect future history would be undone, so that the War of the Ring would proceed as in the books… If the group found the One Ring and went bizonkers with it, sometime after the characters died, it'd have to make it's way back to the river for Deagol and Smeagol to find it again, right on schedule.  It gives the illusion of freedom, but ends up as the ultimate railroad, because all their activity would have been futile.