A discussion of the movie, and using some of the ideas in your D&D game 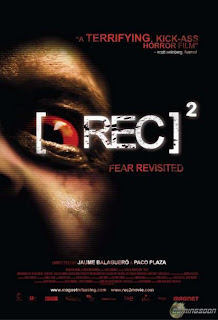 Wow, I finally had the chance to see this one.  Most nights at House Beedo, by the time the various bedtime rituals are finished with all the kids, its way too late to start a movie.  95% of what we end up watching has to be kid friendly.  But the other night I got the kiddos to bed early and was able to catch REC 2.  Great horror movie - loved it.  (Warning:  Spoilers will follow).

REC and REC 2 involve twists on the infected zombie theme.  The protagonists arrive at an apartment building responding to a mundane emergency call, and shortly after they arrive, the building is sealed and quarantined by the government.  No one is allowed out.   It's been discovered that the building is ground zero for a virulent infectious agent that turns ordinary folks into rabid flesh-eating monsters, and the characters are isolated in this high rise apartment building while they try and piece together what's happening (and survive).  REC 2 picks up right where REC 1 ends off, and follows the exploits of a team of SWAT officers that enter the quarantine zone to escort a high-ranking doctor to find the source of the infection.

REC was remade in America as a movie called Quarantine; you may recognize the plot if you've seen the knock-off, but the Spanish originals are better.  One thing I really like about the two movies is that they take the well-worn plague-zombie genre and push it in some new directions; by the end of REC, there's some question whether the contagion is biological at all, and in REC 2 we're introduced to alternate theories that include demonic possession, fallen angels, and prisons of darkness - right in the wheelhouse of some recent columns here.  Yeah, that's the good stuff, brother.  So check them out.

Switching gears back to Dungeons & Dragons, there's a couple of nifty ideas that can be mined here for use in a game.  As REC 2 develops, there's the idea that a single demon is controlling all these infected people like puppets, and there are some really freaky things you can do with that.  Keeping with the demonic possession theme, an obvious choice is to have your own contagious form of demonic possession.  Imagine an entire village that's been corrupted; things look normal from the outside, but once you let down your guard, it's time for Children of the Corn.  A villainous entity that acts by co-opting innocent victims presents moral problems for heroic characters and logistic challenges tracking down the main host or carrier.  I'm sure we could brainstorm a few more "mastermind" monsters that could enslave humans and field a small army of disposable pawns while eluding identification.

I also like the idea of a spiritual versus biological disease, and worked up a version in the past.  Back when the zombie apocalypse first came to Gothic Greyhawk, after the party woke the dead during Death Frost Doom, I started working out details on how a ghoul plague would work.  The thesis went like this:  flesh-eating zombies from the horror movies are better represented as ghouls in D&D, and not the D&D zombie; characters bitten by ghouls should have a chance of contracting the plague - a curse called 'ghoul sickness'; the ghoul curse drives a victim towards cannibalism until they devolve fully into ghouldom.

In Gothic Greyhawk, the demon prince Orcus, as prince of undead, is the source for both the original vampire curse and the ghoul curse.  Ghoul sickness is a spiritual disease that corrupts the victim's soul and is the source of the ghoul's magical paralysis attack; the reason elves are immune to ghoul paralysis is because they're soulless mockeries of humanity (which you can play up more or less depending on the depth of your elf hate).

The original article on ghouls vs zombies and the ghoul curse is here:  The Ghoul, and a follow-up piece, Ghoul's Galore.