Your Villain is Suck 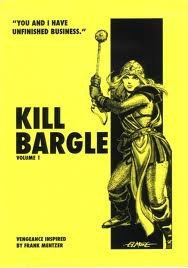 The blogosphere's "Better DM challenge" got me thinking of other things I do at the table that I don’t see mentioned very often; the next few days I'll have some more posts on game mastering advice, starting with a two part piece on improving your villains.

First - has the following situation happened to you?  All of the minions and lesser challenges you built into your dungeon were placed there by the mastermind of the dungeon - we'll call him Bargle the Infamous.  Your group finally busts in on Bargle's lab, and he begins with his annoying monologue.  "So, you are the purile peons that killed my clever kobolds, ostracized my onslaught of orcs, and bumbled through my brace of brazen bugbears, and blah blah blah…"  About halfway through this ridiculous speech, the group decides to unload magic missiles on poor Bargle, quickly loot his corpse, and move on to the next room.  Done and done.

You were thinking this was the big climactic showdown with your favorite villain; you needed him to blabber on about his plots and plans so this final battle would seem meaningful, but the group wasted him without a second thought.  I'm here to help!  Today and tomorrow, I'll highlight some techniques for presenting better villains at the table, followed by some example at how they've worked in my own campaigns.  These techniques are battle-tested, Beedo-approved.

The Problem:  Lack of Relationship
The issue with the Bargle encounter described above is that the group has no pre-existing relationship with Bargle before they bust in on his laboratory.  He's just another meat-bag full of XP waiting to be scored.  There are some villains that are so overpowering and intimidating (like running into a Lich!) that they need no foreshadowing or build up - their very appearance will make the fight epic.  For everyone else, you need to lay the groundwork.

Published adventures are littered with weak villains - if you run them straight up.  Let's look at a classic: T1, The Village of Hommlet.  The main villain is supposedly Lareth the Beautiful, the dark hope of Chaotic Evil.  More like the dark hope of Chaotic Suck.  The first time he shows up is in the last room of the dungeon, about 3 seconds before the players kick his ass, steal his magic armor, and loot his sanctuary - "Drinks at the Welcome Wench are on me fellas!".  The Slave Lords, Drelzna of Tsojcanth, the priest of the Shrine of Evil Chaos, Eclavdra the drow - the classics are full of intricate villains that show up just in time to die.   You may wonder why they even bothered with back stories for these chumps.

If the players don't have any prior exposure to the villain, there's very little emotional triumph when the villain is defeated, and all those notes on the villain's back story are wasted ink.  There needs to be a degree of knowledge, familiarity, and relationship between the players and the villain.  Understand - they'll still kick his ass and loot the corpse and roll the body in a ditch, but at least they'll cheer about it, first.

First-Person Techniques
It sounds really simple, and it is: the players need to know who the villain is before the final confrontation.  If you're a first person purist - meaning the only information the players know about the game world is what they see and hear directly - then you need to have opportunities for the characters to encounter the villain's handiwork along the way.

Let's go back and use Bargle the Infamous again.  Bargle's humanoids are raiding the countryside, attacking farms.  The PCs get involved.  What are different 1st person ways to introduce knowledge about Bargle to the players, long before their characters meet him?

Perhaps the humanoids all wear uniforms or symbols that reference their new master, Bargle.  "You can kill us, but wait until Bargle hears about it - you'll be dead!", gloats the dying orc.  Escaped prisoners back in town tell stories about Bargle, the terrible wizard of the dungeon.  "He was going to cook me for his gnolls, it's a wonder I was able to escape".  The escaped towns person can describe Bargle's appearance and maniacal laughter.  Bargle's legend begins to grow.

Let us not forget, a dear friend of everyone who played the Mentzer tutorial, Aleena the cute NPC Cleric, was cut down by Bargle; an entire generation of Mentzer red box players grew up looking forward to the day they took down Bargle*.  Aleena's father, head of the local church, meets the PC's and shares his story.

As the player characters clear the levels, Bargle learns about them with his crystal ball and takes a personal interest in seeing them die.  Special ambushes are set, and the group recovers written instructions from Bargle to one of his humanoid commanders - it's clear to the PC's Bargle can describe their appearances perfectly.  Now that he's gunning for them, they have even more reason to go stomp him.

Ideally, you can maneuver Bargle to confront the players personally, at least once, before they confront him in his hiding place.  Perhaps he sneaks into town, attacks them from afar, and escapes invisibly.  A well-prepared magic user like Bargle should be able to show up, give the party a bloody nose (or worse), laugh and gloat at a little, and have plenty of tricks to escape.

The risk with a direct confrontation is that players are crafty and unpredictable, and you need to be prepared for them to think outside the box and kill your villain on the spot.  Don't get sucked into the trap of fudging the dice or changing the results if the players get lucky.  If they killed him, he's dead.  Don't have some preconceived notion of a final confrontation; you're not writing a novel.  You stuck the villain out there, DM, live with the consequences - time to move on.

But here's the overarching message - writing a dungeon or prepping a published adventure is only the first step towards running it.  Spend some time thinking about how the forces in the dungeon will interact with the outside world, and if there's a villain or guiding force behind the dungeon, how that villain will react to adventurers invading the dungeon.  Active resistance will make it harder on the players, and it will also give you these opportunities to directly foreshadow the final villain and let the players get a firsthand experience of the villain.  Ignore the fact that the dungeon key places the big bad guy in room 61 or whatever.  The moment the game starts, it's your world, so run the villain like an active opponent following through on his own goals and making his own moves.  You'll have more fun running the game, and your game will be better for it.

Ok - that wraps for today; tomorrow I'll look at using some indirect, 3rd person techniques to develop an interesting villain.  See you then.

*Bargle's Story - Bargle was a lowly 3rd level magic-user in the Mentzer D&D boxed set, but by the time the Grand Duchy of Karameikos rolled around, he was promoted to being a15th level wizard, and the court magician of the vile Black Eagle Baron.  He was a major villain in any Karameikos campaign, and led an organization of criminals and slavers called The Iron Ring.

While Aleena died in the tutorial adventure, it helps to have connections.  Her father uncle was the Patriarch of Threshold, a 9th level cleric, and she must have been raised from the dead, seeing as she too resurfaced in The Grand Duchy Gazetteer.

There have been 'Kill Bargle' adventures in Dungeon, and Aleena has a cult following to this day...