An Approach to Building the Wide Area Sandbox

I'm thinking about what it would take to build the foundation for the wide area sandbox.  Let's say I'm going forward with the idea to build out  a campaign based on the Library of de la Torre idea from the other day; here's the recap of the idea:  at the beginning of the game, the players or a patron inherit the library of a dead priest, who was an investigator into things evil and malign; between the books in the library and the priest's journal and notes, the group gets access to dozens and dozens of plot hooks scattered around Europe, the Mediterranean, and even overseas.

Here's how a typical plot hook could be presented: 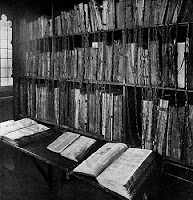 Journal Entry, December 1620:  After our army defeated the Bohemians at White Mountain, the sorcerer Cernobog quit Prague and was forced to leave his ill-gotten treasures behind.  I investigated the salt mine briefly to see if I could recover his infamous grimoire, but a guardian thing was left behind along with traps for the unwary; the army moved on before I could return.  After the war, the Order needs to revisit this place, recover Cernobog's treasure, and ensure the servants of the evil one don't regain the grimoire.  (DM's note:  the battle of White Mountain would have been 30 years ago; there's a reference later in the journal that de la Torre never made it back to the salt mine before his death.)

For purposes of the rest of this post, let's assume that many of the leads are of a similar nature to that journal entry; they hint towards opportunities that may or may not still exist, but will require quite a bit of travel to properly investigate.

What I hope to do in this post is identify the types of tools, tables, and documents that one would need to run the wide area sandbox; hopefully it will highlight some of the challenges vis a vis the typical micro-sandbox, and some kindly readers will offer good suggestions as well.

Maps & Travel Systems
Where are the players starting?  Spain, France or England?  I can see good arguments for making the home base near Paris, London, or Cordoba.  Regardless, most plot hooks will require long distance travel.

Europe is settled and travel is common, but many areas are depopulated after the Thirty Years war, and there are still the risks of bandits, highwaymen, plague, and so on.   Because of the distances, I'm going to examine if overland travel should be more abstract than the typical micro-sandbox requiring a hex-by-hex crawl - it calls for a strategic scale.

I'm going to spend some time comparing the various long distance travel systems presented across My Favorite Editions(tm) of D&D to compare ideas.  I'm expecting a workable campaign map scale would be 30 mile hexes or 24 mile hexes, but I know I've seen some continent maps that have used 72 miles per hex - Mystara stuff, maybe.  Still, there's a strong argument to have detailed (real maps) behind the scenes just to know where everything is - an atlas of Europe would seem pretty useful, along with lists of 17th century settlements.

I'll also want to come up with some simple systems for determining encounter chances and encounter types when traversing mundane, settled areas, and adjudicating complications depending on whether the group stays in inns, camps, or seeks private lodgings as they crisscross Europe.

Settlements
There are probably tens of thousands of settlements across 17th century Europe, and I have no interest in detailing all of them.

The Sine Nomine approach in Red Tide and Stars Without Number really showed me the way here; to build settlement tags (customized for 1650's Europe) to facilitate the presentation of interesting settlements, and to  use similar systems for cities and courts.  (I have a post describing the Red Tide sandbox approach; reading that book really helped move me along this path of considering the wide area sandbox).

For major settlements or important places, it won't be hard to lift some historical details from the real world; I just don't want to get too caught up in endless research (too much historical accuracy is a rabbit hole in this type of campaign).

Encounters
Most encounters on the road will be mundane; the D&D world of 1650 still has it's monsters and magic, but they exist outside of the spotlight, in the margins.  The biggest need for customizing encounters (and this applies to settlements, too) is coming up with cultural notes to help drape local color over encounters and settlements as the group crosses regions.

Kevin of Sine Nomine posted some good advice the other day; make sure to have cultural specific Name list, Dress, Language, Cuisine, Laws and Customs to transform a generic encounter of "brigands or bandits" into Bavarian deserters, Turkish raiders, or French highwaymen.

Maritime Challenges
A big draw for placing the campaign in the 17th century is the New World and the age of piracy; I'll be making sure some of the more lucrative plot hooks involve the Spanish possessions in the New World.

Similar to doing a "textual analysis" of the old school stuff around long distance travel, I'll do the same thing for maritime travel and encounters; I know various bloggers have tackled running 'saltbox games', so I'll want to see what kinds of techniques have been developed out in the community already.  Down the road, I'd love to detail the Caribbean as a large scale saltbox.

Firearms
I'll include rules for firearms; they're mundane armaments in the world of 1650 and will be encountered quite a bit, even if the players realize that hand weapons are still the most effective for "dungeons".

Arcane magic will either be extremely rare or toned down; actual cannons will be the battlefield artillery, instead of say, fireballs.

Fun Stuff
Of course, the whole point of the campaign setting is to build out the creative, fun stuff - the contents of de la Torre's library, including a couple of dozen initial plot hooks, arcane tomes, perhaps some new spells, maybe even an unusable artifact or two.  There's all sorts of stuff you can put into the players hands right from the start, knowing they can't access it until they have the right knowledge or do the research - hopefully requiring an adventure along the way.  One nice benefit of doing that September challenge of short adventures - I know I won't have any problem coming up with dozens of interesting things for the library.

I'll develop some organizations and NPCs moving in the same space as the players - things like secretive groups within the major churches seeking these places for themselves; cabals of arcane practitioners after lost knowledge; rival mercenaries and treasure hunters seeking the loot; dark cultists looking to recover their own lost artifacts.

Although the campaign anticipates a lot of far flung travel, I still think I'd start with a more detailed home base area, with some local adventure opportunities to get things started (and trust the veracity of de la Torre's observations).  Travel costs money, and unless the group gets funded by a patron or organization, they'll need treasure before hitting the road.

Optional Stuff
With all of the long distance travel opportunities, it's quite likely trade and arbitrage will come into play - either on land or sea.  The upcoming ACKS rules I've play tested a few times have basic rules to support trade economics in a D&D setting; I'd probably start by seeing if ACKS economics could be adapted to the post-Renaissance.

I'll also need to decide if the rules as written do a good enough job for resolving duels and rapier fighting.

Objectives
Initially, the campaign would be about exploring some of these leads to see what kind of looting or scavenging could happen, while the group avoids the problems of post-war Europe.   As the characters learn about some of the threats out there, maybe the motivation changes, but it's safe to assume a degree of avarice when starting out and let it evolve from there.


The List
Here's what the do list currently looks like:
What kind of stuff am I missing?  How would you approach making the continental maps, and where would you place the home base - I'm mainly considering England, France and Spain (because of the overseas opportunities) but should consider the Netherlands for the same reasons.

Other things where I could use suggestions - good sources for 17th century culture (it's clear I'm off to the library); also - recommendations on whether travel should be more abstract and played out day-by-day.
Posted by John Arendt at 8:28 AM