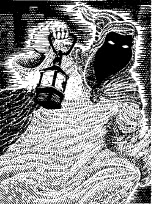 Prior to the game, we talked about last week's ghost encounter and how I misinterpreted some of the guidance on running it (beware the ghostly clone); when the ghost hangs out entirely on the ethereal plane (beyond the ability of 99% of adventure parties) it's a pretty brutal roadblock.  They had few options on dealing with an ethereal monster.

Luckily, they had the foresight to raid the Count's library for books on the undead, and returned to the village with research materials.  They were able to learn that ghosts hate the sound of church bells, and they could bring blessed bells from the small chapel in the village and hopefully enrage it into materializing and attacking directly.  Protection from Evil would protect against Magic Jar possession (incidentally, this became explicit in 2E - I got a hold of some 2E books recently and saw the change there, thanks Stefan Poag!)  The characters also sought the aid of the wise gypsy woman outside the village, Madame Eva, who was willing to sell them an overpriced scroll featuring a pagan exorcism spell.

You may recall that I laud the use of a physical calendar (Happy New Year, Greyhawk).  I scratch notes on it each game night, and when events are scheduled for some future point, I have a place to put them and not forget.  Months and months ago in real time, the group had pillaged the tomb of a dwarf emperor and triggered a spirit of vengeance to start pursuing them (when we ran LOTFP's Hammers of the God).  After that caper, they dispersed their ill gotten gains around the dwarven stronghold, Stonegate, while keeping a few choice items for themselves.  For weeks of game time now, the dwarven spirit of vengeance has been murdering the possessors of its stolen items and returning them to the tomb.   I made a mark on the calendar all those months ago when it would finally catch up to the players in Barovia.

Tonight was that night.

As if on cue, the group decided the time was nigh for them to start finding personal living quarters in town; Mister Moore was moving in with his new lady, Ireena; the priests were staying at the chapel; everyone else had claimed a large home near the town square.  There was no shortage of property in the vastly depopulated village.

Phat Kobra had dwarven plate mail that once belonged to the foul emperor; the dwarf emperor's spirit attacked at midnight, the other characters waking in horror to see their companion held in mid-air by smoky tendrils that were draining his blood into a nebulous cloud.  A rage-filled dwarven face materialized in the smoke from time to time, "I will take back what is mine…"

The clerics and magic user were elsewhere, and too far to help; the non-magical folks needed to figure this out on their own - quickly.  The spirit was immune to weapons, but took some damage from holy water - imagine sleepy characters in their underclothes, desperately running up and down stairs to reach their backpacks, spilling out the contents while vainly searching for extra vials of the stuff.

One of the kids thought they should try a torch, but kept missing on the to-hit roll.  Meanwhile, Kobra was quickly nearing death.  Then the torch hit, and it dissipated part of the spirit.  "Quick, everyone get torches!"  It was one of those fights that came down to the last roll; Kobra was literally dropped to zero hit points by the monster's last bit of damage, and then the spirit was dissipated and destroyed by flame.

Not only did the kids discover fire was the way to defeat it, they remembered the room in the dwarf tomb with the howling spirits in the dark air above the tomb and immediately made the connection between this spirit and the time they plundered the tomb.  The adults were still scratching their heads.  Don't underestimate those young ones - they're sharper than we think, and remember everything.

So Kobra was saved, the clerics were roused and he received enough healing to be fine for the morrow; we'll skip ahead to the next bit of action.

The weather stayed clear in Barovia, and the group set out late the next morning for the castle.  Their ladder into the inner keep was booby trapped, dumping one of the characters to the stone courtyard when some of the lashings gave way.  "Damn vampires", grumbled the party members.  Nonetheless, they made their way through the castle to the crypts, relatively intact.

A select group of characters went through the twisting catacombs to the crypt holding the ghost; they only brought a few warriors to huddle within the paladin's Protection from Evil radius, while the clerics would do their thing.

The "ghost strike team" tore open the crypt door, and the ghost unleashed it's fury; even with Bless, Prayer, and the Protection From Evil effect, the sight of the ghost was chilling and risked 10 years of aging and paralytic fear.  One of the clerics was incapacitated, and dropped in terror (Donavich is now 55 years old, after seeing the ghost in consecutive weeks).  Serge was struck with fear as well.

The ghost failed at its possession attempt of the other cleric, Mordecai, because of the Protection from Evil, and grew enraged as the cleric chimed his holy bells.  It roared around the group to materialize before Mordecai and rend him physically.  Leonidas the fighters, Grumble the Halfling, and Kobra were still on their feet, and quickly shifted to start smashing the ghost with enchanted weapons - they have a sword against undead called "Ghostcutter" and Ravenloft's own "Sunsword".

The ghost grabbed Mordecai and they watched in horror as decades of his life drained into the monster - Mordecai went from a robust 19 year old youth to a 59 year old mature man right before their eyes.  The ghost was beaten back (and it failed a morale roll) but at a hideous cost.

His hands shaking with weakness, Mordecai pulled out the rolled parchment with the exorcism spell and began to intone words of power that would drive the ghost from the mortal world.  He made his exorcism roll and the ghost was compelled to enter the great beyond, shrieking in fury.

This was one of those massively memorable game sessions for me - the showdown with the ghost was cinematic, terrifying, horrible, and totally awesome.  My players did a great job; my campaign world doesn't expect or require them to be heroes, but they go out of their way to make heroic and selfless choices - good job, fellas.
Posted by John Arendt at 7:50 AM