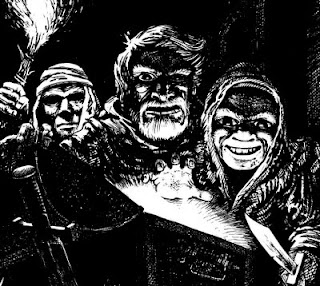 I've been thinking a lot about "back to basics" D&D lately and how the traditional adventure structures complement the game's objectives.  Characters advance by gaining experience; the most efficient experience is gained from the recovery of gold while exploring dungeons.  In Moldvay and similar versions of classic D&D, you get about 4-5 times more gold than monster experience when using the suggested dungeon stocking methods; you see this formula loosely followed in the published modules, too.

Hex crawls and multi level mega dungeons are exploratory by nature, and provide plenty of opportunities to recover gold.  Coincidentally, the hex crawl and the mega dungeon are the old school structures that support massive player agency and have gotten the most attention in the OSR as we rediscover these old forms.  They emphasize site-based exploration over combat.

It's a worthy issue to consider, because it raises the question - how closely should your game cleave to the strengths of D&D?  Or put another way - how much of your D&D game should be exploration versus fighting?  And to put a practical application on the question - as I consider something like the wide area sandbox - should the plot hooks and adventures be focused on plundering ancient sites and locations vesus monster hunting or cult bashing?  Here's a note from the boss on the question of drift:

The danger of a mutable system is that you or your players will go too far in some undesirable direction and end up with a short-lived campaign... Similarly, you must avoid the tendency to drift into areas foreign to the game as a whole. Such campaigns become so strange as to be no longer "AD&D". They are isolated and will usually wither. Variation and difference are desirable, but both should be kept within the boundaries of the overall system. Imaginative and creative addition can most certainly be included; that is why nebulous areas have been built into the game. Keep such individuality in perspective by developing a unique and detailed world based on the rules of ADVANCED D8D.
--Gary Gygax, Dungeon Master's Guide (Preface)

There's a steady trajectory across versions of D&D that's moved the game from an exploration model to a fighting model.  If Moldvay and earlier versions put the emphasis on exploration and treasure recovery versus combat, AD&D increased the value of fighting; AD&D 1E literally doubled the amount of experience gained from fighting monsters, compared to BX D&D.  By the mid-80's, we see things like Dragonlance, where XP for story rewards have crept into AD&D's twilight years.  2nd Edition had an alternate XP system as well (my memory is shaky here, but I remember class rewards); 3E focused on the combat encounter and CR (challenge rating) as the basis for XP, and 4E dispensed with XP for treasure entirely - 4E rewards are 80-90% tactical combat, 10-20% recommended for quests, and 0% for treasure.

Drift indeed.
Posted by John Arendt at 7:18 AM