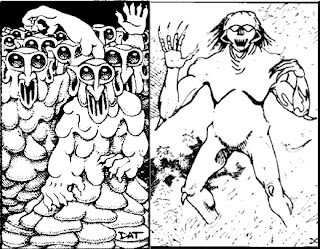 Most "mythic mondays" have involved looking at folklore to use in D&D; this week takes a look at some of D&D's folklore (specifically the 1E AD&D Monster Manual).  There's a curious divide in the AD&D 1E Monster Manual between undead monsters that have their origins in Hell, and undead spawned by demonic forces in the Abyss.  It leads to some interesting implications regarding how these monsters can be used in the campaign.

First, we need to start with the humble Manes demon and Lemure devil; Manes are the remains of evil souls that sink to the Abyss after death; Lemures are the souls of evil beings consigned to Hell.  In both cases, there's a curious sentence in the Monster Manual indicating how these evil souls can be transformed by the masters of the domains as undead in the mortal plane.  Manes can be  recycled into Ghasts and Shadows; Lemures can be changed into Wraiths and Spectres.

Looking closer at the various undead in the Monster Manual, we see that Ghasts, Shadows, Ghouls and Vampires are all Chaotic Evil undead, and they have ties to the Abyss;  Ghasts and Shadows are created from Manes.  Yeenoghu is the Lord of Ghouls, and commands the loyalty of an entity called the Ghoul King.  Orcus is called the Prince of Undeath and can summon Shadows and Vampires.

On the Lawful Evil side of things, we've already indicated that Lemures can be transformed into Wraiths and Spectres; the other Lawful Evil undead are the Wights and Ghosts (we'll bypass Mummies and Liches for now).

I'm also ignoring Zombies and Skeletons; they're mindless.  Since they have no self-motivation, they are Neutral alignment, and can be created through the Magic User spell, Animate Dead; no intervention by demonic or hellish forces is required.

Earlier in Gothic Greyhawk, I established that Ghouls and Vampires both owe their existence to demonic cannibal curses; the curse drives the monster to consume the flesh or blood of the living.  (Yes, this is even more reason to replace the energy draining vampire with the vampire of folklore that consumes blood).  Demons yearn for chaos and destruction, and demonic undead seek to spread their curses far and wide, consuming all in their path.  That's really the defining characteristic for demonic undead; ravenous and destructive hunger.  I really like the idea that ghouls, vampires and shadows can be used as plague monsters, overwhelming areas with their contagious curses of undeath that spread geometrically if unchecked.  We've seen plagues of ghouls in the pop culture zombie phenomenon (28 Days Later. World War Z, The Walking Dead); plagues of vampires are out there to be found as well (Salem's Lot, They Thirst, The Strain, 30 Days of Night).  Why have I never considered a plague of shadows?  This situation must be immediately rectified.

Hell is another matter.  What are the motivations of the devils?  In Gothic Greyhawk, Hell is a divine realm, like Heaven, and devils are fallen angels.  Where the inhabitants of the Abyss seek to destroy creation, the legions of Hell seek to corrupt, control and subvert it.  This gives us some insight on how to use hell-spawned undead monsters in the game.

Wights, wraiths, spectres, and ghosts most commonly haunt specific locations; they serve well as guardian spirits, corrupting or subverting the original purpose of the site they ward.  Wights infest the barrows and tombs of fallen heroes, mocking the cultures that sought to honor their heroic dead and turning the fallen hero's remains into vessels of evil.  Wraiths and spectres are placed wherever their presence will disrupt the efforts of the divine realm and the powers of good; they prevent the exploration and reclamation of ruins, the recovery of lost holy relics, or the cleansing and consecration of fallen shrines and churches.  There's something poetic about a ghost in the graveyard, or haunting the abandoned churchyard, that really captures the right aesthetic for me.  Thematically, I like that all of these undead wither the life force through one method or another, whether it's energy drain or aging.

There is another category of undead that is neither demonic nor hell-spawned; humans that willingly undergo the undead transformation to carry out their evil life's work after death.  The Lich and the Mummy would fall into this latter category; misguided human that undergo a horrible transformation to extend their lives unnaturally (in the case of the Mummy, I would say it's the evil priests performing the burial ceremony that carry out the ritual of mummification).

I've been spending more time than usual with various AD&D books lately; it's hard not to appreciate some of the depth in those amazing books from the 70's.  I have to think this "Vampires are from demons, Specters are from devils" was intended by the Monster Manual references; does anyone know if it was ever developed further, in Dragon Magazine perhaps?

I'll do a companion piece next week looking at the undead monsters introduced in the Fiend Folio and Monster Manual 2 and see how they relate to these themes.
Posted by John Arendt at 7:03 AM