Lovecraft and Me: A Confession 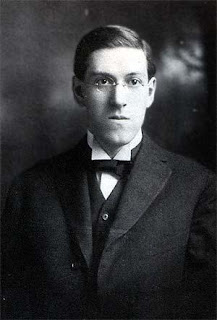 A week ago this place passed its one year anniversary, and I set some goals for the coming year.  One of them is to do more blogging on Lovecraftian subjects, diverse and sundry; a post per week on a topic related to Lovecraft or the Call of Cthulhu RPG.  A lot of the inspirational reading I'd like to complete this year includes Lovecraft predecessors like Dunsany, Machen, and Chambers.  I've had a long career running Lovecraftian games, so there are plenty of reviews, campaigns, Keeper techniques, and mechanics to discuss, plus the chance to get advice and insight from the community. 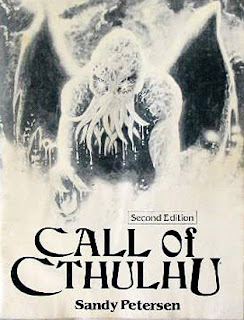 A blog is such a personal thing, it seems fitting to start such an endeavor with recollections of how my lifelong interest in this author's works became fixed in place.  Cast your mind back to… 1983!  Yep, that was the year I picked up one of the early Cthulhu boxed sets, the one with the stapled rule book and the classic cover over to the right:

I'll be honest with you, I had never read a lick of Lovecraft prior to getting that boxed set, and much of the flavor of the setting evaded me.  The fixation on the 1920's was baffling.  Instead of serious investigations, we usually ended up playing it D&D style, picking characters who were typically "Veterans of the Great War" so we could justify loading them down with shot guns and tommy guns, kicking in doors and yelling at the Deep Ones to "Get some!  Blam, blam blam!"  Heh.  In defense, I'll point out that we were just starting high school. 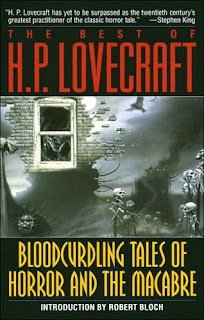 I went on to read a fair amount of Lovecraft afterward, especially the Random House editions like this one on the left, with their sensational covers promising blood and horror, but delivering only nervous aesthetes and musty tomes.  I still have a copy of that one in the attic.  My favorite story was At the Mountains of Madness, which I had read via a hardback borrowed from the town library.  It still is my favorite.

It wasn't until college that Lovecraft made sense to me, and I remember the moment clearly.  I was going to Montclair State University; it was still called a college then, and they had just initiated a liberal arts honors program; I was in the inaugural class.  Regardless of major, the honors program forced a worthy load of humanities on the participlants.  I was suffering through a sociology class that was exploring the modern mindset (Simmel's "The Metropolis and Mental Life", that kind of stuff) when I finally made the Lovecraft connection;  HP Lovecraft's stories reflected a modern mind stripped of its romantic ideals.

In the preceding 50 years or so before Lovecraft's writing, Darwin's On the Origin of Species postulated a theory of evolution that transformed humanity from created beings to evolved animals.  Revolutions in Europe had seen the fruition of Marx's Communist Manifesto and the evidence of the Hegelian dialectic in action, a refutation of the great man theory and prior forms of historical analysis.  (Nowadays, we forget the kind of revolutionary fervor the anarchists brought, even to America.)  Freud's theories reduced the inner self to a series of mechanistic urges explained through repressed desires and childhood traumas.  Bringing it all together, the world had just witnessed the bloodiest war in history, displaying inhumanity on a massive scale across the poisoned trenches of World War I.

These new theories were an assault on the special role of humanity in the divine plan; religion was under siege.  In fact, these ideas were antithetical to any form of Romantic world view.  It was then I perceived Lovecraft's singular achievement - he was the first modern horror writer!  Lovecraft embraced man's new place in the cosmos.  We are animals, advanced and intelligent, but animals nonetheless, floating on a big rock in a sea of stars.  Not only are we prisoners on this rock, we're slaves to our biology, slaves to our psychology, and the progress of history is not the unfolding of a divine plan, but the mechanistic reactions to economic forces.  We are alone.  Except Lovecraft pointed out, we're not alone.  When he gazed into the night sky, he didn't see an empty void; he saw monsters.

So that's what did it for me; the recognition of his significance in the annals of horror made me a lifelong fan.  Bam!  Hooked for life.  Nowadays, someone would just hop on the internet, read an essay on Lovecraft on Wikipedia, or find some published criticism, but back then we had to do our own thinking, and my newfound understanding of Lovecraft seemed a profound personal achievement at the time.  I was quite proud of developing my appreciation honestly.  My games of Call of Cthulhu were never the same, and I went on to run many memorable campaigns.

These days I'm far more optimistic about the human condition than I was back in my "jaded" twenties.  Perhaps it's related to fatherhood and all the joys that can bring.  I appreciate that Lovecraft's writing appeals to both atheists and the religious minded.  For instance, one of the higher profile scholars of Lovecraft these days is Robert M Price, an American theologian and instructor at a seminary.  The connection between religion and existential fear runs deep.  But I'm afraid that will be a musing for another day.

So that's how my obsession with HPL began, many years ago.  I can assure the regular readers there will be plenty of Dungeons & Dragons posts on the way; I'll consign the Lovecraft items to a weekly flirtation.  But I'm looking forward to working in discussions of Call of Cthulhu, Trail of Cthulhu, horror gaming, and reviews of the source literature into my blog's regular mix of topics.  Thanks for reading!