I dusted off the campaign cartographer this weekend while working on some maps for Thule and the Black City; I rediscovered all these old campaign maps, plucked from the wreckage of abandoned campaigns destroyed by Gamer ADD.  Anyone else use CC3 for their maps?  I was never great with it, but a B&W map shouldn't be too hard - I think I'm going to do the black & white island maps both in Hexographer and CC3 and see which approach I like best (they'll end up with hex overlays either way).  In the meantime, here are the forgotten maps of yesteryear:

Greek Colonies
At one point, I thought it would be fun to run something in the ancient world, based around Greek colonists to eastern Spain.  Here's the map of Spain, a map of Greece, and then Europe (all done in Campaign Cartographer).  I seem to remember there were dwarves in the Pyrenees, and had a dwarven monastery discovered by the Greek colonists.  Celtic indigents were bad guys.  I don't remember exactly what "Pillage" was about on the Achea map, but I remember my son (who was probably 6 or 7 at the time) wanted me to use it as a city name - I think it was meant to have a Necromancer king and a bunch of undead.  I'm laughing that I used Roman names on a Greek map of Europe!

Forgotten Realms
These two are from some starts/stops in the Forgotten Realms when we were still fooling around with 4E just before the old school return and Gothic Greyhawk - one is from the Luruar area, the other is Thar in the Moonsea region.


Nentir Vale
These must have been from the beginning of the 4E time period - they are two versions of the same smooshed Europe, with names lifted from Hyboria.  I can see where I placed the Nentir Vale near the top of the map, assuredly marking these as early 4E era maps. 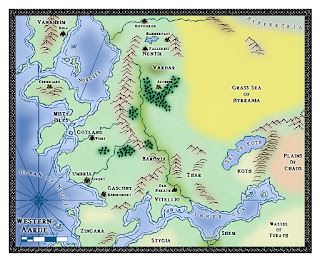 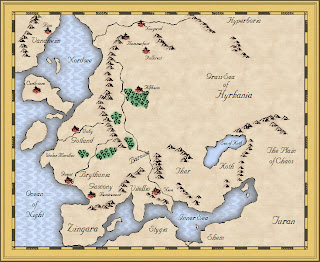