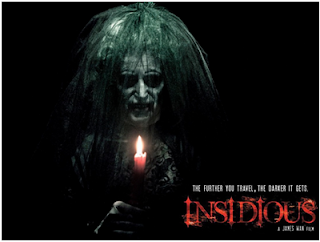 I'm traveling a bit this week, so being kid-free means I can catch a few long overdue horror movies through netflix streaming.  First one up - Insidious.

The first act does a fine job building tension and dread without any gore.  The basic premise is that a kid falls off a ladder and enters a long term coma, and is returned home for hospice care.  Meanwhile, the family is terrorized by progressively more disturbing haunting sequences until they feel forced to change houses.  When the haunting recurs in the new house, they start reaching out to psychics and paranormal investigators - and learn the epicenter of the haunting is the child himself, as a demon seeks to take over his vacant body.  It slides into the surreal when we learn the spirit of the boy is trapped deep in the astral plane, and this is the reason for the unexplainable coma.  And then one of the characters goes on an astral journey to bring him back.

The theme of a disembodied child stuck in a spiritual realm is reminiscent of Poltergeist, but in this one, we get to see the other side, what the psychic calls "The Further"... and see what inhabits it.

Gaming Inspiration
There are moments late in the movie that don't live up to the film's early promise, but the final act is where Insidious is really great for gaming inspiration.  I can't think of much media that involves other planar experiences (unless you count old Doctor Strange comics).  The scenes in the astral plane are inky and dark, claustrophobic, in haunted landscapes with ghostly phantoms reliving moments of horror through stop motion tableaus.  There's a sequence in the lair of a demon that's creepy and evocative in a fun-house sort of way - I loved it.

In D&D terms, "The Further"  is closest to the ethereal plane (rather than the D&D astral plane).  It's a place where ghosts and apparitions roam, and demons from more distant places come closer to the lands of the living seeking victims.  If I ever incorporate ethereal travel into a game, I'll revisit Insidious for inspiration on presenting the ethereal realm as a nightscape of bodiless haunts.  Definitely worth a viewing.
Posted by John Arendt at 7:31 AM