Viking Ships for the Black City 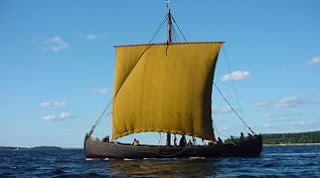 I've been doing writing on the side for the Black City manuscript; a lot of the adventure details won't get posted on the blog, seeing as I expect to run and publish them, but the setting material slated for the appendix is fair game.  Here's are the notes from the secion on typical Viking ships.

A couple of questions have arisen.  Longship recreations can go about 10-11 knots with a wind, which corresponds to 90 miles per day.  Most D&D books aren't clear on whether a day of ship travel is 8 hours, 12 hours, or double or triple for 24 hours, and how often winds change.  Just presenting travel for a typical day isn't quite enough.  More reading is required.

The other question is philosophical and purely a game decision - would you make Norse marines that are not adventurers 0-level men or 1st level fighters?

VIKING SHIPS
There are many different variants of the longship - karvi, knarr, snekkja, skeide, and the famous dragon ship (drakkar).  For purposes of gaming, I'm collapsing the variants into 3 simple types - the knarr, a ship optimized for trade and open seas travel, the longship, and the drakkar.  The massive drakkar was a flagship meant for short distance invasions, owned by kings, and typically wouldn't be found in the hands of petty captains on Thule; most vessels on the island will either by piloting knarrs (80%) or longships (20%).

The knarr has fewer rowing stations than a military longship - only just enough for guiding the craft and handling.  It can be piloted by a smaller crew.  Cargo is placed towards the center of the ship; otherwise, it appears like a shorter and slightly wider longship.  Both knarrs and longships use clinker hulls, a single 40' woolen sail and single mast; the crew is completely exposed to the elements, and rowers sit on sea chests, which are also used to store their gear.

Both longships and knarr are shallow draft vessels that need no harbor; they can be beached on shore and carried for portage.  Because the crew needs to eat their food cold while under sail, the preference is to beach the ship whenever possible and make a regular camp on land.

Viking navigators sight a bearing using something called a bearing dial or horizon board, aligning their course based on the sunrise instead of navigating by the stars.  This is especially useful during the long summer days.  A special type of crystal prism, called a viking's compass or solarsteinn, is used to find the sun on cloudy days.

Here are game stats for these vessels:

SHIP DEMOGRAPHICS
Yeoman farmers and local lords (hersir) are the owners and sponsors of a knarr and crew, putting the vessel in the able hands of a local captain or the noble himself, and hoping for mutual profits.  The knarr captain will be a 3rd level fighter, and the crew of 8-14 sailors will be 1st level fighters.

Militant war-bands that have converted to adventuring from raiding will have a longship, sponsored by an earl or jarl back home.  Longships will have larger crews of 40-50 level 1 fighters, commanded by an experienced 5th level captain and a 4th level second in command.

Most crews will have agreements to split shares of treasure equally, after apportioning a large percentage (33-50%) to the sponsors that provided both ship and captain.


* The ship pictured above is the Ottar, a modern day recreation - you can read about it here:  Ottar.  Very cool.
Posted by John Arendt at 10:58 PM