Too Busy Looking at the Map to Notice the Monster

I had a post last week that brought up issues that happen when shifting time scale and narrative control between players and the DM.  A specific example is daily overland travel.  It's all very high level and abstract; the players say something along these lines:  "We get up early, break camp, and will march all day through this hex of woods, on guard at all times".  Play shifts to the DM, to narrate what happens for that day.  If an encounter is rolled, the time scale quickly shifts down from a daily unit of time back to 10 second melee rounds, collapsing to a granular level.  What are the characters doing, what is the specific local terrain like, when daily time shifts back to combat time?  Random tables to the rescue.

Below are a set of three tables - one for what are the characters doing at the time of the encounter, the other two are for woods and mountain local terrain, respectively.  I spent about 15 years living near the Rockies in Colorado, and camping up in Wyoming, and have a fair sense on both types of terrain.  Our campaign is shifting towards wilderness and mountains shortly.

The charts below can work with percentile dice, but I'm expecting to print out page 71 of the Vornheim book and drop some different colored d4's on a sheet of paper; I included a cross reference column with the Vornheim page in case anyone else agrees that dropping dice on a sheet of paper is rife with entertainment value.  (If the dice lands on the square for "baker", for instance, that guys is actually relieving himself when the encounter comes along.  That sad little monkey).  For my own game, I'll probably have one d4 for the group, and toss 1-3 additional d4's to indicate what a few of the outliers or stragglers are doing.  Players will complain, but anyone who has hiked with the scouts or spent time in the infantry knows that groups don't keep their intervals or spacing, columns do the inch-worm thing, bunching and stretching, and you're always stopping to let the stragglers catch up and take water.

I generated a few sample results to see how some actual encounters would kick off - this is what the group is doing when the wandering monster check happens:

Group 1, in the Woods
These guys are taking a standing rest; perhaps someone just yelled for the stragglers to catch up.  They're near a deadfall in the woods, so maybe they've stopped to try and determine the best way across.  One guy is sitting down, another is tying his shoe, but one guy is on active guard duty - taking his job seriously!

Group 2, in the Mountains
There's a nearby ruined habitation, perhaps an old wooden shack.  Most everyone is rummaging in their packs, except two guys are pouring over the map together, and a third is jogging back - perhaps to tell them no one noticed the monster clearing the tree line behind the party.

Group 3, in the Woods
It's a sunny glade, and these jokers are strolling along fairly casually.  One guy is completely enjoying the scenery (I blame the elf), another is falling back to drink water, and a third is taking a standing rest.  I hope a dragon lands in the glade and squashes all the pretty wild flowers that's distracting these clowns.

I'd feel a tinge of guilt springing something like encounter 3 on a group as an arbitrary DM choice, but when the dice decide, it's all fair game.  I'm ready for our next big wilderness crawl! 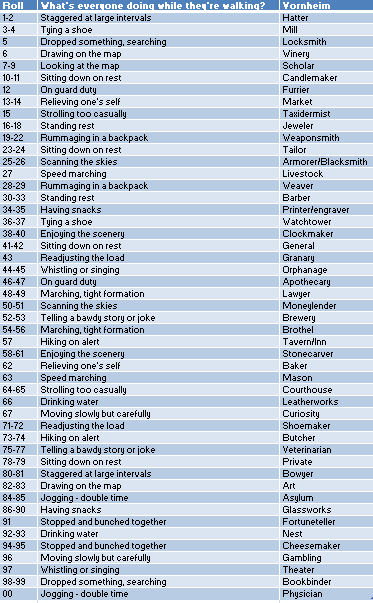 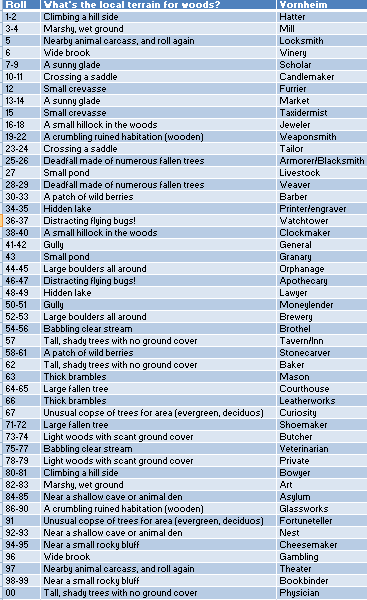 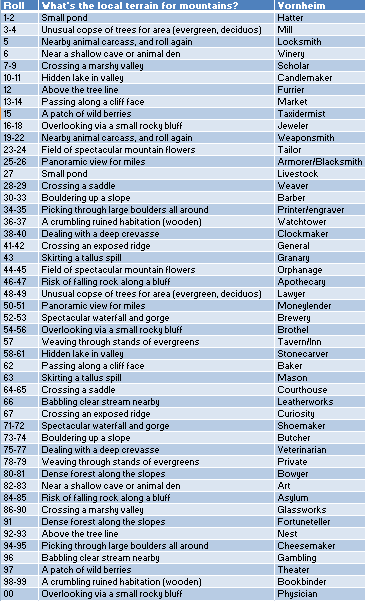 Email ThisBlogThis!Share to TwitterShare to FacebookShare to Pinterest
Labels: Gaming