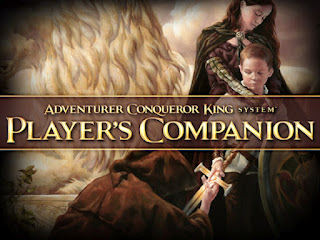 Just last week I reviewed the ACKS core book, and Lo, the guys over there had already announced a Kickstarter for their next supplement, the ACKS Player's Companion.  How could I resist?  So here's some first impressions on the play test version that's been posted to the project backers.  (You back the project, you get sneak peeks, and a chance to play test and make suggestions.  It's great marketing.)

The Player's Companion extends the core rules by adding a series of new classes, the dwarven machinist and spelunker, the elven ranger, and some human classes - mystic (monk), shaman (druid), and priestess.

I'll come out and say it though, the thing that got me fired up with the book-love was the extensive list of templates.  (I think they claim there are 144 of them).  An ACKS template is basically some pre-selected options that speeds up character generation and gives the character a bit of early flavor.  ACKS supports the old school roll-and-go - it's got basic 3d6 in order for abilities and simple classes, like classic D&D.  The templates take it the rest of the way, by adding a preconfigured set of starting equipment, starting money, and suggested proficiency selections.

For instance, your 1st level fighter could be flavored like a Norse ravager, a knight, a Roman legionnaire, a mercenary, a gladiator, or perhaps a pirate.  I love the support this provides for roll-and-go, and heartily approve of archetypical fast-packs of equipment.  Maybe it's just me, but nothing drives me nuts quite like the guy that shows up late, then wants to roll up a character, and then has to wade through the equipment list - while everyone's waiting.  "You mean now I get to pick some spells and a proficiency or two, as well?"  GAH.  Just put my head in a vise already.  So I love fast packs and random equipment generators; that stuff's like gold.  There's also plenty of inspiration for depictions of the classes, just by browsing the templates.

I'm beginning to see how race-as-class is evolving in ACKS.  Remember that classic D&D used Dwarf or Elf as a class, effectively making all dwarves as fighters and all elves as fighter/magic users.  AD&D separated race and class, allowing things like dwarven clerics and elven thieves.  It's clear the ACKS approach is to give each race a selection of classes that are similar to the human versions, but different enough to maintain racial distinctiveness, and costing the racial benefits into the experience curve.  Thus, a dwarf player can be a dwarven vaultguard (for a fighter flavor), a craftpriest (for cleric), or a spelunker (for a taste of thief).  The new one is the dwarf machinist, which is totally new, and provides the ability to create automatons and clockwork creatures - assuming that fits into your campaign's vision of dwarves.

There's some extra stuff in there too, such as extended spell lists for the new caster classes, and a section on creating custom classes.  This idea of expanding class coverage horizontally is very much in line with how Mentzer/Mystara evolved.

Okay, here's an interesting bit about this particular Kickstarter.  It met the goal in what, 3 days?  I've  had questions whether the announcement of 5E, coming out presumably sometime next year, would dampen people's enthusiasm for backing OSR projects in 2012.  Apparently that's not a problem.  I can't say that anything I've seen from the 5E discussions has lit my world on fire yet.  I also don't see the new game catering to the crowd that wants to see economics and domains in their campaigns.  Games like ACKS will be able to keep on trucking.

ps:  Haven't had the chance to sign up for the LOTFP indiegogo yet, I want to see how it differs from Kickstarter first.  Who's in that one?