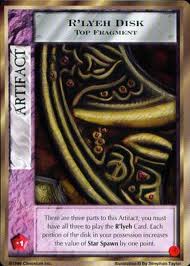 So far in the Lovecraftian sandbox, I've focused on the kind of campaign structure and investigations that support player choice and agency; I'm ready to wrap the series up next week with a sample campaign.  This week we'll look at a bunch of elements that frequently show up in Cthulhu games.  I'm putting this list together to make sure I "check off the right boxes" as I compile notes for the setting.

Antagonists
This one is pretty obvious, most investigations involve a (human) villain or cult, and usually some kind of Cthulhoid horror.  If you're starting your scenario design with the awful truth and working backwards, you've had to figure this out already.  I find some of the most interesting villains are those that end up using Mythos magic as a means and not an end, and don't consider themselves insane worshippers of an outer god.  It always goes horribly wrong for them, like the guy that built Jurassic Park.   Munch munch.

Organizations
I don't recall too many recurring organizations in Lovecraft's actual stories, but they're excellent devices in a campaign.  An individual antagonist can be removed, but the organization endures and continues to plot against the player characters (or the world).  Well-known examples in some of the published campaigns include The Masters of the Silver Twilight, or the Brotherhood of the Black Pharaoh.  I really like some of the organizations in the Delta Green book, like the Karotechia (undead nazi sorcerors) or The Fate (mythos wizards running an organized crime network).  One of the closest examples in Lovecraft's work would be the Cthulhu Cult, as we catch glimpses of a world-spanning conspiracy in the eponymous story.

Eldritch Places and Ominous Locales
Investigations will already feature interesting and ominous locations; when I think of this as a campaign element, it means putting in a recurring location that will have an impact beyond a single investigation.  It could be a mundane location with occult overtones like The Fate's Club Apocalypse, or something completely beyond the mortal realm, like The Great Library of Celaneo (an alien library orbiting a distant star, only reachable via magic).  Resources and sources of knowledge are ideal for this role.

Bystanders
My view of the Lovecraft campaign structure involves the players belonging to an organization that allows the campaign to survive frequent character death; the first set of NPCs will be other folks in the organization, peers and patrons.  In the Armitage campaign idea, this would mean students and other professors.  Recurring (mundane) locations should have NPCs associated with them, and as we learn more about the player characters, some personal attachments can be added, too.

I tend to be on the fence about how much time to require players to put into background notes up front; ideas like pillars of sanity and sources of stability from Trail provide some convenient mechanics for at least jotting down quick notes without too much depth, so that's probably the approach I'd use for campaign play.

Tomes and Artifacts
A number of Lovecraft stories directly involve eldritch tomes or artifacts, so this is another element that will probably end up in some investigations already.  Two quick examples the reader will recall would be the Necronomicon itself, and the Shining Trapezohedron from Haunter in the Dark.  I like eldritch tomes in the campaign, because they present real dilemmas for players to decide how much to read them because of the associated sanity loss.  The other suggestion here is to consider multipart artifacts, so that the artifact's significance extends longer into the campaign.  One that jumps to mind are the many pieces of the R'lyeh Disc, which show up in Shadows of Yog Sothoth as a scavenger hunt theme.

That's it for this week; I'll pull it all together next week and put up a sample Lovecraft sandbox.  Well, I'm calling it a "sample", but it could easily be the one I use this spring when we start some episodic Cthulhu games.


--On the image above: Anyone remember Chaosium's old Mythos TCG card game from the 90's?  I must have a thousand of those in a card box in the attic - I might have to bust them out sometime for a retrospective.
Posted by John Arendt at 6:24 AM