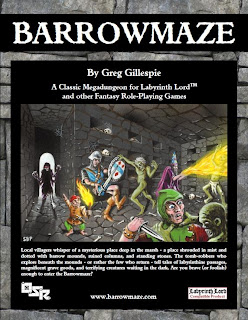 I had the chance to read Greg Gillespie's* Barrowmaze this week.  Barrowmaze is a large dungeon beneath a barrow-ridden moorland.   It's not explicitly stated, but my sense is that characters would reach 5th level or so by the time they exhausted Barrowmaze's opportunities - that's a lot of adventuring.  The PDF is 87 pages and you can get it at the usual suspects (Barrowmaze at RPGnow); it's a great value for $6.66.  The statistics are officially for Labyrinth Lord and the Advanced Edition Companion.

The atmosphere of the dungeon makes an immediate impression.  Imagine a haunted moor outside of the nearby village, small hillocks shrouded in mist, hiding barrow mounds, or rings of standing stones, on the crests of the hills.  It's hard not to be reminded of the village of Bree and the famous barrow downs from Tolkien's The Fellowship of the Ring, and it made me realize - it's about time we've seen a cool published adventure that placed a large, sprawling dungeon beneath a haunted moor!

Continuing the theme, the dungeons under the moors are creepy, quiet, and strewn with undead.  A dark power has defiled many of the crypts, transforming the interred remains into hungry monsters.  But the treasures and magic belonged to an ancient culture, and the only thing standing between the adventurers, and great wealth, is whether they have the requisite courage.

Barrowmaze breaks the mold of the traditional vertical dungeon, extending horizontally, instead - the further one travels from the entrance, the more difficult it becomes.  It's loosely divided into four different sections of difficulty -the antechambers, the haunted tombs, deserted dormitories, and finally, the death vault.

The author has used some interesting techniques to reinforce the theme of plundering long sealed tombs.  There are frequent calls for excavation, or smashing through bricked up walls, to reach the hidden room beyond; much of the treasure is interred in burial catacombs (niches) carved into the walls, which require careful searching.  Time is always a factor.  There are 30+ new monsters, although 10 or so of them are conversions, bringing monsters to Labyrinth Lord that you may remember from the Fiend Folio or Monster Manual 2, like the Huecuva or Coffer Corpse.

The writing in Barrowmaze is informal; the design notes and introduction read like one gamer speaking to another gamer.  This tone, along with the many pieces of art by Stefan Poag, portraying parties of adventurers in various stages of combat or exploration, gives the adventure a strong hobbyist vibe.  Greg claims that Barrowmaze was the backbone of his home campaign, and it feels like a piece that started as a well-cared for home brew that has been elaborated and developed into a published work, ready for market.

I love the atmosphere of the sprawling labyrinth of crypts and ruins beneath a field of haunted barrow mounds, and I think this would be fun for any old school group to experience.  There are enough factions and mysteries beneath the hills to provide drama, and give a party actual enemies to plot against, besides the many undead horrors.  I guess the best praise is this:  I'm already thinking this one will go to the top of the queue when the weather warms up, and I start another weekend kid's game with my son and his neighborhood friends.  Barrowmaze would slot nicely into The Grand Duchy of Karameikos on the haunted moorlands beyond the town of Kelvin.

Hope you enjoyed the review!

*Greg's alter ego is Kiltedyaksman, over at the Discourse and Dragons blog.