I've been interrupting the regular stream of Dungeons & Dragons posts this year to bring more Cthulhu blogging, and my first big project has been to step through campaign structures and different approaches to launching campaigns.  I'm particularly interested in exploring ways to run investigative sandboxes to enable the kind of free-form, sandbox style I enjoy so much in D&D.  If you're wanting to run a weird horror D&D game in a mundane or historical world, these posts should offer ideas for that as well, since there's a lot of overlap with games like Cthulhu Dark Ages or Cthulhu Invictus.

Last week's entry, Points of Darkness for Horror Gaming, contrasted a horror setting with the typical D&D fantasy approach (points of light).  It emphasized the importance of plot hooks for engaging the characters;  I further separate plot hook approaches into "passive" or "active".

Passive plot hooks are related to the back story of the characters before the adventure:  "You are all gathered together as friends of  Important NPC™ Jackson Elias."  Or, "You receive a letter from your old friend, Henry Hancock, the African explorer, asking you to come to Scotland and help him at his current dig site…"  I have issues with the passive plot hook approach.  They trade on some pre-existing emotional connection between the player characters and the NPC.  While I expect players to buy into the general premise of the game, I don’t like having to tell them to feel a certain way towards an NPC so they have the right emotional resonance with the scenario.  That's not very old school.

The second issue with passive plot hooks is that once the scenario is initiated, there's no longer a credible reason for replacement characters.  One of the in-jokes in COC gaming involves a party narrowly escaping a TPK, needing replacement party members, and recruiting the waiter, the store clerk, the taxi driver - you get the idea.   Here's one caveat; while I dislike the passive plot hook approach for a campaign game, I recognize that it works well for one-shots and convention games; the Keeper can distribute pre-generated characters with appropriate backgrounds and push the game right onto the tracks.

This isn't a new problem.  There was an 80's publication that took a tongue-in-cheek approach to an organized group of Mythos busters (The Field Manual of the Theron Marks Society) but it wasn't until Pagan Publishing's Delta Green (1997) that a campaign setting outlining a comprehensive framework for investigations altered the face of Cthulhu gaming.  I consider myself an old timer, so I'll trace the evolution of these frameworks from Delta Green through the latest books I've seen published.

You might ask, what's the big deal?  Important characteristics of the investigative frameworks are that they provide built in objectives for the game, as well as solving the problem of credible replacement characters and campaign continuity.  The campaign now transcends the player character party and a TPK is no longer fatal.  The casual dramatists and authors in the group can still write their detailed character back stories, but the frameworks make it easier for everyone else to make their 15 minute character and start rolling the dice. 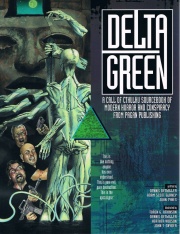 Delta Green
Delta Green is a (fictional) conspiracy within the United States government, to investigate and stop Mythos activities, and keep the existence of the Mythos horrors secret.  Players take on the roles of cross-departmental government agents who manage to use official cover, appropriations, and false orders to get involved with investigations that have alien or supernatural elements.  One guy could be in the ATF, someone else in the FBI, and so on.  It tends to feel a bit like The X-Files, badges and guns, with more hardware and spy tech (since it's an underground conspiracy communicating through back channels).

The most interesting part of the Delta Green setting is how other corrupt organizations have learned of the existence of Mythos magic, kept it secret, and attempted to wrest power from the supernatural by weaponizing  the Mythos.  It always goes horribly wrong.  The signature opponents in Delta Green include various inhuman Nazis that have extended their lives unnaturally, and the Majestic 12 group (formed after the Roswell incident) which has been benefiting from alien biotech while turning a blind eye to alien abductions.  Don't get me wrong, the opponents in Delta Green are not like the pulp Nazi sorcerers you see in a Mignola Hellboy comic; the situations in the Delta Green books tend to be fairly dark; they're smart, slick, and mature.  Delta Green captures that pre-millennial conspiracy angst from shows like The X-Files or Millenium.  The books are hard to get, but I hear PDF versions are nearing release at the usual places, and an updated version of the setting for the post-911 "war on terror" world is underway as well.

Call of Cthulhu d20
I wasn't a fan of the d20 level-based approach to COC, but the d20 book itself was still chock full of useful campaign advice for Call of Cthulhu; John Tynes, one of the driving forces behind Delta Green, had taken his skills to WOTC during this time and worked on the d20 Cthulhu book.

The d20 book recommends the use of a tentpole NPC - a powerful figure behind the scenes that ensures continuity for the investigation - or the creation of an organization.  It goes on to describe Cthulhu setting genres and  sample organizations for each one, such as Lovecraft Country, Hometown Horrors, Private Investigators, Badges and Secrets, Esoteric Orders, and Global Hot Spots.  (Delta Green even makes a cameo).

The other thing I really liked in the d20 book was that it took each of the genres and looked at how it might change for different time periods, and included good movies or TV shows to help set the mood.  Good stuff all around.

Trail of Cthulhu
Last week I did a review of Trail of Cthulhu; Trail provided three detailed campaign frames, two of which have been further developed in later books.  The first one, the Armitage Inquiry, assumes the various professors of Miskatonic University, having previous Mythos encounters  (as detailed in some Lovecraft stories), recruit like-minded individuals from the faculty and student body to explore and document Mythos occurrences.  The second frame, Project Covenant, suggests the Naval officers, involved in destroying the Deep One colony at the end of The Shadow Over Innsmouth story, form a secretive investigative arm of the government - similar to a 1930's version of Delta Green, but with actual government backing.  The final suggestion is Bookhounds of London, which puts the players in the role of book merchants collecting and selling rare and highly sought volumes (and frequently encountering the mad occultists seeking said books for all the wrong reasons).  It reminds me quite a bit of the excellent novel, The Club Dumas.

Two of those campaign frames get the full treatment in The Armitage Files (cover pictured above) and Bookhounds of London.  Both are excellent, so I'll definitely review them in the future.  The (award winning) Armitage Files is unlike any game book I've seen, and warrants a full post (and a warning!)

The Laundry RPG
I don't have The Laundry yet.  It's a BRP system like COC, based on a series of books by Charles Stross (The Atrocity Files), that details a secret British agency known as The Laundry.  The Laundry is tasked with keeping the world safe from occult horrors.  My perception is that it mixes quite a bit of office-culture and Information Technology humor juxtaposed against high-tech Mythos investigations in a world where computers have made monster summoning a not uncommon affair.  I'm not sure how the black humor would work out in game play, but I'll keep my eyes open for getting a copy and plan on reading The Atrocity Files at some point.  Although I'm a purist at heart, I'm sure my group of regular players, all tech geeks, would probably find this approach entertaining.

This discussion waxes long!  Providing a framework for ongoing investigations has become de rigeur in the Chaosium licensees making modern Cthulhu games.  There is an alternative to a structured organization, mentioned briefly above, it is the idea of using a "tentpole NPC" to anchor a campaign; I'll visit that one shortly.  Then we'll return to campaign development, perhaps looking at structuring investigations, and what makes for a good one.  Ciao!