Book Review: The Mathematics of Magic, The Complete Enchanter Series 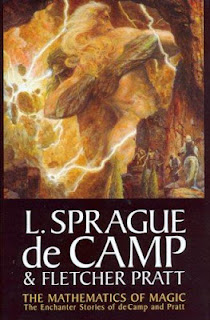 About the time I started blogging, a little over a year ago, there was a movement towards rereading the classic fantasy works that inspired Gygax and Arneson for making Dungeons & Dragons.  These have been listed out most famously in the AD&D Dungeon Master's Guide Appendix N.  You'll often see lists identified online by one gamer or another as 'my version of Appendix N'.  I've aspired to read through my own list as well, and finally got the chance to finish another one - The Mathematics of Magic, a collection of novellas by L. Sprague de Camp and Fletcher Pratt.

The protagonist for this series is Harold Shea, a clinical psychiatrist who discovers a way to slip from our dimension to various alternate realities where the worlds of earthly literature and mythology exist as real places - he visits mythic Ireland and Finland, the world of the Norse gods, the realms of literary creations like The Faerie Queene or Orlando Furiousa (The Madness of Roland).  Other realms that are visited include Kublai Khan's Xanadu, the Land of Oz, and Edgar Rice Burrough's Barsoom.

If you like stories where modern characters either travel back in time or find themselves in a fantastic realm, you'll appreciate the central conceit for each of these.  Harold Shea is brainy and bold, and constantly has to match wits with dangerous "heroes" that are both stronger and a bit homicidal.  Protagonists that seem to be idealized stand-ins for the author are oft referred to as a "Mary Sue", and Shea falls into that space.

One aspect of the stories that will be fairly interesting to gamers is this; Harold Shea is a fencer, and many of the challenges involve using fencing styles against other styles and armor.  At the end of the collection, there are a few interesting essays from the 1960's debating whether fencing would work in other times and places, including various field tests by the SCA (Society for Creative Anachronism).  There's also a letter by a young General Patton, then only a lieutenant, discussing sword techniques for the pre-World War I era army, and revising army doctrine around slashing and stabbing.  Considering the frequent arguments in the blogosphere regarding shields in D&D, table top gamers would find the essays quite interesting.

The writing in the Shea stories isn't fantastic, but many of the fantasy books I've read from the 40's through 60's don't light the world on fire with their prose, so take that as you will.  The primary reason I found the collection enjoyable was because of the author's interpretation of those various mythic and literary realms traversed by the characters.  For instance, I've never read The Kalevala, but Harold's adventures in mythic Finland are intriguing and I could see myself adding that to the reading list.  Same with mythic Ireland, and the stories of Cuchulainn bounding over the turf in a chariot and chopping off heads to mount on his wall of trophies.  I would recommend reading one of the novellas, going off and reading something else, reading the next one, and so on.  500+ pages of Harold Shea straight through started to feel like a grind.

Inspirations for Gaming
The Harold Shea stories are often held out, alongside Jack Vance's Dying Earth stories, as inspiration for the magic system used in Dungeons & Dragons.  I tend to think Vance's influence was primary, but Harold Shea does need to learn various verbal, somatic, and material components to perform his spells, and anyone who's played 1st Edition AD&D is familiar with those terms.  The magic in Shea's stories often uses theories of sympathetic or contagious magic, as well, which we see in the choice of material components in AD&D.

This book is likely the inspiration for the D&D green dragon; in the Norse tale, a dragon emerges from a cave and breathes poisonous, chlorine gas.  Other creatures I remember include cockatrices and griffins.  But most of the antagonists are the violent, homicidal "heroes" of myth and folklore.

So perhaps the most direct inspiration is on AD&D's Deities and Demigod's Cyclopedia.  The heroes and gods of Finnish, Irish, and Norse myth are featured in the book, along with some introductions to their mythic realms, and an enterprising game master could use the Deities book, along with the source materials and the staging in the Shea stories, to create a campaign built around traveling from one mythic realm to another.  Don't tell me that wouldn't be totally awesome.
Posted by John Arendt at 10:12 AM