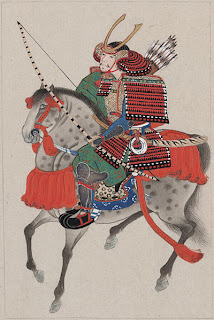 One of my gaming bucket list items is to eventually run a good Asian-themed D&D game.  I love the interchange between Western tropes and samurai cinema, the way you can do Shakespeare in feudal Japan (Ran) or draw parallels between American westerns and the movies of Kurosawa (The Magnificent Seven).  One of the ideas in my back pocket is to transpose elements of Arthurian myth, like the Grail Quest, or the Excalibur story (more the sword in the stone than the Lady in the Lake), into a D&D campaign set in the far east.

Here’s a simple premise - perhaps during the early medieval period, when native peoples like the Ainu of Japan were being driven out, a massive cataclysm was brought down on the imperial palace as the natives unleashed the fury of their gods, or the primal spirits punished the ruling caste for hubris; the imperial castle was destroyed, the surrounding province was turned into a wasteland, the remnants of the populace in that area are monsters - transformed into goblins, enslaved by demons, hateful shades of the spirit world, it could be any number of things.  The legendary sword of the last legitimate shogun is lost beneath the ruins of the old castle (perhaps even stuck in a stone anvil awaiting the next shogun…)

Bam!  You have a kind of leaderless chaos in the larger setting, where the remaining noble families vie to make their lord and head the new regent, but they all secretly fear if the sword of truth were recovered, everyone would unite behind the rightful shogun.  Small groups that represent the clans and families, essentially parties of adventurers, venture into the forsaken province and scour the ruined castles and dungeons to find clues to the location of the lost sword.  Everyone hopes to be worthy of recovering it, thus proving their worth to the emperor back in the new capital; the possessor would be named shogun.  It's as if the movie Excalbur has a love-child with The Hidden Fortress and you throw in a hex crawl and megadungeon.

One thing I'm learning in The Black City campaign, I love the ambiguity of competing human encounters, and the scheme here would let the DM populate the forsaken province with bandits, brigands, rival adventuring parties, hostile samurai, enemy ninja, and so forth.

It's essentially a limited sandbox, because one thing I struggle with when thinking about a sandbox game based in a pseudo-historical feudal Japan is whether it would pass 'the tavern test'.  The group members are probably servants of a daimyo, and they have autonomy as long as they're doing the larger meta-quest given as a mission by the boss - finding the lost sword of truth.  But how much personal liberty did a samurai have during different periods of feudal Japan?  How much must credulity be stretched to have a mixed caste party?

I don't even know if a campaign like this even has "taverns", per se:  "Ahem, can I have your attention?  I am Noboru-san, and my friend the Korobokuru and I would like to hire a pair of ninjas and a Wu-Jen (er, Shugenja) to go with us into the forsaken lands.  Are there any ninjas for hire having a drink here?"  Pssst:  the two guys in the corner dressed in black ninjutsu gi's look interested.  No wait, they're just struggling drinking without taking off their masks.  Joking aside, the whole premise of The Seven Samurai is hiring guys to defend a village from bandits, which implied a degree of freedom to adventure and places to hire mercenaries, so maybe it's not that far off.

Yeah, so I don't know much (anything) about Japanese medieval society and the social classes, beyond what you see in movies, so I have to plead temporary (but cure-able) ignorance.  I'm sure I'll be reading the related Osprey/Turnbull books I recently got.  Either way, the limited scope sandbox is a way to finesse a setting with a rigid caste system while giving the players autonomy on the frontier where they can carry out their explorations.  The trick is making something that meets the needs of traditional D&D - exploration, solving puzzles, resource planning, tactics, monsters.  If I wanted it to be all tea ceremonies and how good is your calligraphy… well, there are already games for that kind of excitement. 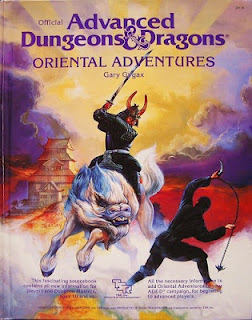 I don't have a name yet for this hypothetical setting… chances are it would be done using a BX type game like LOTFP or ACKS, I'd just want to add better unarmed martial arts to fit my preferences (I'm a big fan of judo and the predecessor arts, jujitsu and aikijutsu) and a mechanic to track reputation.  Some of that could even be borrowed from AD&D's Oriental Adventures.  I really like the modern trend towards "a day in the life…" history books, but haven't read a good one for feudal Japan (yet).  I've heard the old FGU game "Bushido" actually did a good job of laying out a setting, so I'll check that out as well.  I'm not expecting to do much around this setting soon, there's a bit of background reading and research to do first and I'm doing a ton on the Black City, but it's another one on the radar.
Posted by John Arendt at 4:46 AM