Mythos Expeditions as a D&D Campaign

See the world, visit interesting places, and loot them. 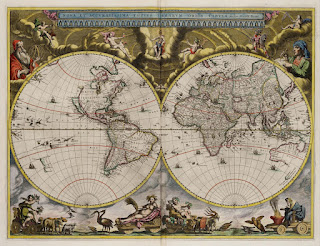 One of Pelgrane's upcoming books is called Mythos Expeditions, and it involves a central organization (in this case, Miskatonic University) sponsoring expeditions to far flung places, where a group of intrepid scholars and professors can ostensibly encounter Lovecraftian horrors.  I'm struck by how well this would work as a campaign style for an early modern D&D campaign - horror themed or otherwise.

Some of the challenges running a quasi-historical game is the need to make magic, monsters, and eldritch horrors rare and unusual - just like if you're running a Cthulhu game, whether it's modern day or 1920's.  So you push the horror to the fringes, and draw a strong demarcation between the civilized world and the realm of nightmares that exists hidden just below the surface.  There might still be monsters hiding in plain sight, but adventures involving lost cultures and ancient secrets are frequently pushed out to the fringe - rugged frontiers, where primitive cults and sleeping gods still hold sway, archaeological marvels wait to be discovered, and ancient ruins have escaped plunder.

I love the idea of putting together a similar 17th century investigative organization - scholars, academics, hermetic investigators, perhaps even the church - and letting the players act as agents and soldiers that plan and carry out the field operations of such a group in the D&D context.  It could be a mercantile venture, interested in looting ancient places and recovering lost treasures and artifacts.  The Age of Sail allows you to surface rumors all over the Caribbean and the Americas, as well as introducing ruins throughout North Africa and the mid-East, not forgetting all of the great opportunities for crumbling European castles dating back a few hundred years.

D&D is mostly about kicking down doors, stabbing monsters in the face, and getting paid.  But instead of wandering outside the local village and mugging a bunch of goblins in the woods for their coppers, the quest becomes a multi-staged voyage to the deserts of North Africa to discover the lost tomb of the Black Pharaoh Nephren-Ka.  Exotic locales, isolation, and mythic grandeur make all the difference.  Let's put some lipstick on that pig.

This isn't exactly a new idea for me; many of my undeveloped ideas have involved one campaign or another in the early modern - the Colonial Hex Crawl, Harrow Home Manor, Library of De La Torre, the Wide Area Sandbox, and so on (all labeled somewhere here on the blog).  Ultimately, the reason I haven't fully moved forward with one is that I'm still enamored with the pure hex crawl and site-based exploration that works so well in D&D's typical micro-setting.  Providing the players absolute freedom to go anywhere is much simpler when 'anywhere' is constrained to how far the characters can walk in a day.  I haven't gotten my head around finding the balance between detail and scope in a large macro setting. The tools used for Sci Fi gaming sandboxes must have the answer.  Traveller or Stars Without Number is pretty much the Age of Sail, In Spaaaaace...

If the players buy into the premise that the game is more akin to a Cthulhu game, with stronger elements of investigation and exploration, the question of agency shifts from "Which plot hook or idea do we prosecute?" to "We’re prosecuting this idea, and now we have great freedom to find the approach that works best for us."  That seems very manageable indeed, and frees the game master up to developing one intricate site-based location at a time, akin to a classic TSR 'module'.
Posted by John Arendt at 11:31 AM