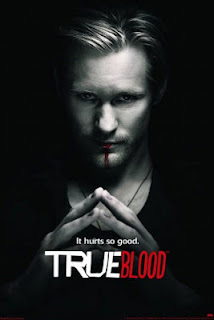 My setting work has taken a steep drop off the past few weeks.  I usually wake up pretty early, getting in an hour or so of writing before work, but I've been sleeping in later and later.  It's the stupid HBO True Blood show - after 4-5 years, I finally started watching it and have been binging on that supernatural soap opera, replete with it's lurid southern gothic themes and trashy sex scenes.

I don't talk about it much on the blog, this mostly being a chronicle of my reunion with old school D&D the past decade, but in the 90's I was predominantly a World of Darkness referee, running a bunch of campaigns.  I had pretty much moved on from the whole 'angst-ridden, unwitting supernatural monster thing', and hadn't shown much interest in the HBO series, but Wifey recently watched the whole thing and she's been a relentless pusher.

The series watches like someone novelized their Vampire: the Masquerade (V:tM) campaign - it’s a mash up of the World of Darkness, urban fantasy soap opera, and dime-store romance.  And yet, it's got an intoxicating blend of vampire politics, werewolves, witches, fairies, shapechangers, ghosts, and random mythological things that immediately conjures those years of running V:tM.  The lure of nostalgia is strong.

Of course, my gaming groups back then were mixed gender, we were younger club-goers hitting the goth-industrial scene on a weekly basis, we had the bloom of youth, and vampires were new and cool.  I picture my current group of middle-aged, suburban dads sitting around the table (with fake vampire teeth, no less) pretending to be angst-ridden vampires wrestling to keep their humanity, and it's cringe-worthy.  Some things are perhaps best left to the past. 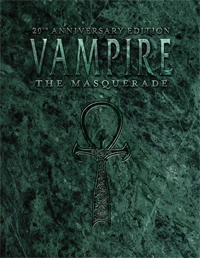 Still, with Gen Con looming, I can't help but wonder if I should wander by the White Wolf area and see how things are going these days.  I remember reading earlier in the year that they'd put together a 20th year anniversary edition of V:tM that returned the game to its roots.  Maybe I could just take a peek, for the nostalgia.  Surely I wouldn't buy... too many copies of it.  In the meantime, I'll catch you later - I still have some episodes to watch.

Email ThisBlogThis!Share to TwitterShare to FacebookShare to Pinterest
Labels: Beedo, Vampire the Masquerade, World of Darkness