Here is some hearsay and news coming out of the Pelgrane and Chaosium booths at Gencon, as well as a reader request for more Pagan Publishing news.

Pelgrane Press
I spent some time at the Pelgrane booth, and Simon Rogers, the owner of the company, is always approachable.  Rumors on the message boards have been swirling of excellent play test reports about Pelgrane's epic sized Trail of Cthulhu campaign, Eternal Lies.  They've been suggesting a publishing date of November 2012.  The new piece I heard is that Pelgrane is considering a slip case with multiple books, since boxed sets would move it into a different tax classification.  Personally, I'd much prefer a slip case for multiple books than a boxed set, so that's all good.

Kenneth Hite was at the booth and was willing to discuss his upcoming projects.  Mythos Expeditions is a campaign frame where a university group, like Miskatonic University, sponsors archaeological expeditions to far off places.  I'm stunned it's taken 30+ years for someone to build out a published campaign around this theme of exploration, and I can't overstate how much I'm looking forward to this one.  Many of Lovecraft's best stories invoke the theme; At the Mountains of Madness, The Nameless City, The Shadow Out of Time.  It should be full of ideas that are useable across game systems and genres.  Ken indicated he's wrapping up the rules, initial scenario, and scenario guidelines, and then the Pelgrane freelancers would fill out the remaining scenarios.

Being an OSR aficionado myself, I had to ask about the LOFTP adventure in Ken's queue.  (Mr Raggi roped in Ken to write an adventure as part of his hardcover LOTFP indiegogo campaign a few months back).  Ken described it as a mashup between Apocalypse Now, All Quiet on the Western Front, and The Good, the Bad, and the Ugly; an adventure across a scarred battleground in a fantastic war between godly arcane wizards.   Sounds intriguing;  we don't have a lot of fantasy adventures with the horrors of war in the backdrop, and earth-blasting magic is a viable stand-in for the destructive power of 20th century technology.  Queue Wagner's "Ride of the Valkyries".

A few other Pelgrane projects were discussed; Dreamhounds of Paris is underway, Robin Laws is writing that one.  Although I enjoyed Bookhounds, I find I'm much more interested in Pelgrane's adventures than settings, so I'm cautiously interested.  For Night's Black Agents, Ken is working on The Dracular Dossier, a book similar in theme and approach to The Armitage Files, but involving a hunt for Dracula in the modern world, using NBA's spy thriller rules set.  Gareth Hanrahan will take it forward.  My need to mash up Delta Green and Night's Black Agents is currently a faint siren song in a distant room; soon it will be an unavoidable symphony, driving me to madness.  I better start reading Night's Black Agents in earnest. 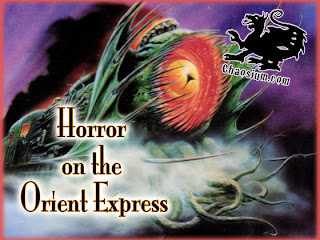 Chaosium News
The big news is that Chaosium has launched a Kickstarter.  A few days ago, they announced a push to get Horror on the Orient Express, a classic boxed set campaign that's been out of print for 20+ years, updated and back in circulation.  View it here:  Orient Express Kickstarter.  They've neared $40k in two days with a month and a half to go, doubling their $20k goal.  Good to see.

I never owned Orient Express myself, so it'll be excellent to get a shiny new copy of one of Chaosium's classic campaigns.  More importantly, it shows that Chaosium is paying attention to the game-o-sphere and willing to crowd fund some much-sought after reprints.  One can only hope an updated, deluxe version of Beyond the Mountains of Madness is next in the queue.  Alas, Orient Express is targeted to be ready for Gencon 2013, a year away.  Better funding won't necessarily improve their production times.

Pagan Publishing
The guys at the Pagan booth were chatty and willing to talk about various Delta Green campaigns and adventures, but very noncommittal about the timing of the reboot.  (On various podcasts and going back to Gencon 2011, Pagan has been discussing a new version of Delta Green that updates the setting for the post-911 world scene and the USA's 'War on Terror').  My appeal to readers is whether anyone made it to the Pagan Publishing seminar Saturday night and could post some news?  My group hit the road after dinner Saturday, and I had to miss it; there's still a chance it was recorded and will make it out on a podcast feed.