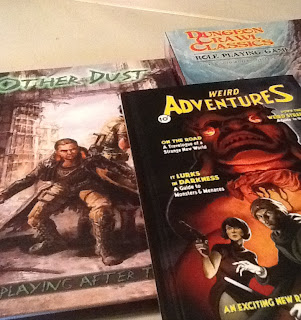 Lazy post today; here are some recent gaming treasures that came in the mail.  I had been holding out to get a copy of Weird Adventures at Gencon, but Brendan offered one during the LOTFP campaign, and I'm delighted to finally get a chance to read it - it looks fantastic.  Thanks Brendan!

I loved the Red Tide Setting and its use of tags to quickly generate locations, so I was pretty interested to see Sine Nomine adapt Stars Without Number (and the tag system), for a grittier post-apocalyptic setting - Other Dust.  That one just came in, after RPG Now had it on sale a week or so ago.

The DCC RPG hype was too much, and the thought of having to wait until next year when the book is reprinted convinced me to help them clear out the warehouse sooner.  I don't know how it would play in The Black City, but I'm certainly open to checking it out.  My concern is the heavy use of tables during play might slow the game too much, so a playtest is warranted.  I have high hopes!

These were my top 3 wish list books before Gencon, so that leaves me looking a little further down the list for items to seek out while I'm in Indy.  Anyone familiar with An Echo Resounding, the mass-combat and domain book for Red Tide?  I'm hoping to leaf through a copy at the OSR booth and make a call on it.  I may also look for the Mongoose hard cover of Stars Without Number, if they have any.  My recent interest in feudal Japan could have me seeking for an old print copy of Bushido, but its probably easier just to get the PDF - I don't know even know if vendors bring out-of-print books.  I didn't spend too much time in the dealer's room last time. (Edit:  Apparently FGU is still selling it new, too!).  I'll be picking up a copy of Night's Black Agents over by the Pelgrane booth, and seeing what kind of Trail of Cthulhu goodies they have that I'm missing.
Posted by John Arendt at 6:46 PM