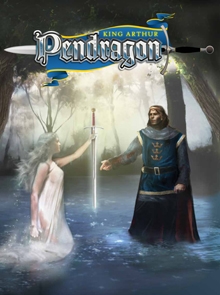 I recently picked up the 5th edition of Pendragon (technically 5.1, I guess) and am rapidly devouring the book.  What an amazing setting!  Some readers mentioned it in the comments to the Prince Valiant post last week, and it got me thinking - I love Arthurian myth and lore, why haven't I picked up this game as a reference?  The oversight has been rectified.

Much like the Prince Valiant comic strip, the game ostensibly takes place in 5th and 6th century Britain, but borrows heavily from the high middle ages by transplanting technology, customs, and social norms, essentially enabling the stories and tales of the great Arthurian epics to occur in that earlier time with the later trappings.  Some of the unique bits to the game include a heavy emphasis on social traits (personality traits, virtues, and passions) and an epic sweep where years roll by quickly, allowing players to build families and lineages of heroic knights.

I'm in no rush to play, since my current D&D campaign is rolling quite well, but I adore the setting and could see myself using it almost whole cloth when my younger kids are ready to play.  They love knights and faeries and wizards, and the default Arthurian setting described in Pendragon is brilliant.  "Dungeons" aren't part of it, but there's an event called 'The Enchantment of Britain' which heralds a return of magic to the realm during Arthur's reign; it provides a handy excuse for old fey passages and forgotten holes in the ground to reopen, allowing the goblins and bugbears and other night creatures to return to plague the forests of the countryside by night.  My younger ones would enjoy such a setting quite a bit; my oldest just got finished reading The Once and Future King, and I'm sure he'd enjoy such a game as well.

Email ThisBlogThis!Share to TwitterShare to FacebookShare to Pinterest
Labels: Pendragon, The Junkyard