Review: Cabin in the Woods

Yes, you had "Zombies" (in the office pool).  But this is "Zombie Redneck Torture Family." Entirely separate thing. It's like the difference between an elephant and an elephant seal.

In order to discuss how this movie would be applicable to gaming, some spoilers may come up - go ahead and skip this one if you haven't seen the movie yet. 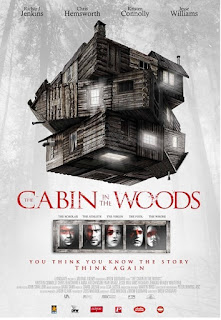 I recently had the chance to see Cabin in the Woods, and I enjoyed it immensely.  It's a well written script, and pokes quite a bit of fun at the horror genre - it's a meta-horror movie in much the same way as the 'Scream' series, but is perhaps even more deconstructionist.  The movie involves an archetypal group of young people, lured to a remote cabin in the wilderness on a weekend getaway, and unleashes a monster on them (the zombie redneck torture family) after they read an incantation from a journal in the cellar.  In the meantime, a facility full of government type workers are watching all the action on video screens, placing bets on the monsters and cheering for the kills.

While Cabin in the Woods is not terribly scary, the movie is interesting, funny, and full of twists and surprises.  It's chock full of easter eggs for long time fans of the genre.  It reminded me thematically of the old The Wicker Man, with the theme of luring in a willing sacrifice, as well as another horror-comedy movie, the old David Warner Waxwork movie from the late 80's, where the victims choose their own monster deaths.

Inspiration for Gaming
The first thought I had was to draw inspiration directly from the movie, and subvert the tropes of a typical dungeon.  We already see a bit of this in games like ACKS; the reason the world is full of dungeons is because wizards build dungeons to attract monsters, and then hire adventurers to go clear them out so they can harvest monster parts for their experiments.  The game master could take it even further, and have a dungeon that's been built to harvest adventurers.  Consider this quote from the movie where one of the corporate workers explains why the victims need to be lured to their deaths:

They have to make the choice of their own free will. Otherwise, the system doesn't work. Like the harbinger: creepy old fuck practically wears a sign saying "YOU WILL DIE". Why would we put him there? The system. They have to choose to ignore him. They have to choose what happens in the cellar. Yeah, we write the game as much as we have to, but in the end, if they don't transgress, they can't be punished.

It wouldn't take much more than rumors of easy coin to lure in the typical greedy adventurer.  The DM could put together a killer dungeon that exists purely to kill dungeon crawlers, whose greed and lust for wealth draws them beneath the ground so they can be sacrificed for the greater good.  It'd be especially funny if the masterminds behind the dungeon consider themselves to be the real heroes.  I'll just point out, Jim Flame Princess pretty much hit this target already with The Grinding Gear adventure module a few years ago, but you could have fun doing you're own version and work in the supernatural sacrifice angle.

The other bit that is pure gold is the cellar full of dire artifacts.  Each artifact is tied to a different monster (once again, similar to the old Waxwork movie), so the victims inadvertently choose the nature of their own deaths when they mess with items in the cellar.  A dungeon location where the characters unknowingly select their own opponents would hit a similar note.
Posted by John Arendt at 8:22 PM