Prince Valiant as a D&D Setting 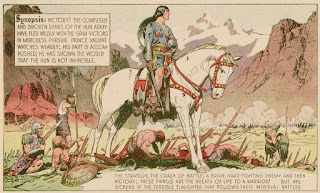 75 years later, the weekly Prince Valiant comic series is still going strong.  There have been a number of different creative teams keeping the continuity through the years, and the comic strip has been compiled into a number of different reprint volumes; my local library has them, in fact.  I never fully got into the drama of Prince Valiant as a kid, but as an adult, I appreciate the unique narrative captions and the realism in the graphics.

But here's one thing you won't find in Prince Valiant - historical realism.  Prince Valiant's adventures take him from the Roman frontier to defending Europe from the Huns; as Gawain's squire (and then companion), he rubs shoulders with King Arthur and the Knights of the Round table, and spent time chasing viking raiders to North America.  The castles of Valiant's England are not wooden motte and baileys like you'd expect in the dark ages, but the massive stone structures of the high middle ages.  Prince Valiant was there for the fall of Rome, but still spent time on the crusades and went looking for Prester John; I wouldn't be surprised if Robin Hood showed up in one of the storylines, or perhaps even Genghis Kahn.  The writers pick and choose the most interesting bits from 700 years of western history to weave the ongoing saga.

The fantastic thing about the Matter of Britain is the way it exists somewhat out of time, eliding historical details to absorb later social conventions.  In this way, we get knights in armor, courtly love, and chivalry, all in 5th century Britain, no questions asked!  There's much to be gained in treating your D&D campaign the same way - learning how to stop worrying and love the glorious mess.  D&D draws from a wide range of historical periods and folkloric sources to populate the game with its myriad elements; we don't have to know all the ingredients to enjoy the flavor of the soup.