Review: The God that Crawls 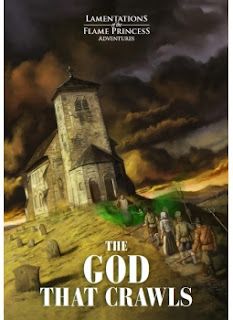 I'm traveling this week, so it's given me a chance to catch up on some reading - I've finished Night's Black Agents and a bunch of the recent LOTFP releases, so I'll be spewing forth opinions (ie, reviews) as time permits.  First up, let's take a look at The God That Crawls, the latest adventure for LOTFP.  As usual, there will be spoilers in the review.

Physically, the book is a pleasing quality - the pages are a nice texture, feature a distinctive edge fade, in two column layout.  Like most of LOTFP's publications, they're roughly 8 x 5 (paper size A5, I believe).  The maps are embedded in the text in greyscale, but there is a nice poster fold out of the maps at the end of the book, in color.  This project was funded as crowd-sourcing, and the publisher, James, doesn’t mess around with quality.

The premise of the adventure involves a winding labyrinth beneath an old church, inhabited by a monster with a shameful origin - the 'god that crawls'.  The villagers and priest, while not evil, are complicit in preserving the secret beneath the church.  Furthermore, the secret labyrinths were used by the ancient church as a sort of 'Area 51' for securing dangerous artifacts, so it's possible that adventurers that plumb the labyrinth could discover those forgotten, ancient vaults that still hold some bizarre and dangerous items.

Regardless of how the characters first get into the labyrinth, once they're in, they're likely trapped until they find an alternate escape route.  Similar to The Grinding Gear, this is a classic dungeon crawl that puts a lot of pressure on resource management, forcing players to choose between speed, encumbrance, careful searching, and time management, while they're tracked by 'the god that crawls' through the labyrinth.

I really enjoyed the atmosphere of the adventure module, and the interweaving of historical details to fully realize the features of the church and labyrinth. There's been a trend-line in the LOTFP catalog to place these adventures in a real world setting similar to 17th century England, and it works well to contrast the mundane details with the horrors of the adventure site.  My only criticism is that some of the weird items in the vaults are both too baroque and outlandish; they're almost trying too hard to be non-standard magic items.  Maybe they'd still be fun in actual play.

I highly recommend the adventure; every adventure in the LOTFP catalog promises a unique and memorable experience for both players and the DM, this one included, and that alone is a fantastic reason to pick this up for running. Like most of the modules in the LOTFP catalog, The God That Crawls is for fairly low level adventurers.  The author's decision to situate more of his published works into 'the real world' is worthy of a longer discussion, but it's a move that makes a lot of sense for the tone and themes of these LOTFP adventures.  I'll have the chance to post notes on The Magnificent Joop van Ooms, Death Love Doom, and The Monolith Beyond Space and Time in the next few days.