Part 2 of my reviews of recent LOTFP books while I'm off traveling and not working on my campaigns. 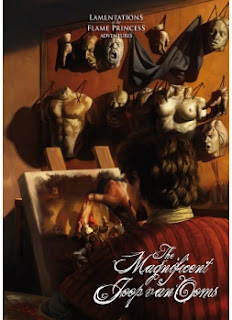 The Magnificent Joop van Ooms is a small pamphlet published concurrently with The God That Crawls, so it was an easy 'upsell' to add my order.  It's an 18 page A5 sized pamphlet, soft cover, with a basic two column layout.  Unfortunately, the text is rather small.

The book describes the studio and capabilities of Joop van Ooms.  He is indeed, magnificent; a 17th century creator with extraordinary talent, combining magical ability with great skill in the arts and sciences.  He's part Leonardo da Vinci, Jules Verne's Captain Nemo, Lovecraft's Randolph Carter, and Shakespeare.  He possesses reality altering powers like you might see in a Twilight Zone episode - his paintings become true, his plays can render magic inert, the angles of his architecture can kill his enemies.  There is horror here, too, lurking within Ooms' ability to paint a future that comes true..

The book does not contain an adventure; it describes Ooms and his oddball retainers, his studio, his amazing abilities and agenda, and then lists a page of plot hooks on how to use Ooms to generate plot hooks for your own adventures.  There's a little historical background on Holland for the early 17th century, and tables covering some Amsterdam encounters and black market trading to support player activities in Ooms' home city.

While this is a useful pamphlet, I can't recommend rushing out to get one shipped from Finland; if you're getting other stuff, it's a fine toss-in or PDF purchase - all the LOTFP books I'm reviewing this week are primarily available in the LOTFP online store.  A character like Ooms is a fantastic patron and a worthwhile addition to your campaign's roster of recurring NPC's, just remember that this book is an appetizer, and not a hearty main course like some of this author's published adventures.
Posted by John Arendt at 8:57 AM