Review: F3 Many Gates of the Gann 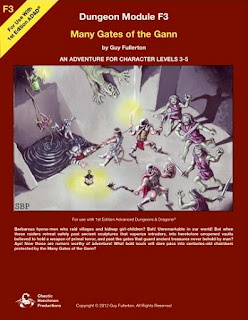 I had the opportunity this weekend to read Many Gates of the Gann.  The adventure is a 34 page PDF published by Chaotic Henchman, available at the usual suspects like RPGnow link: (F3 Many Gates of the Gann).  The book uses a simple 2 page layout, very easy to read, with maps in the back.  It's meant to be compatible with the 1st edition of the world's most popular RPG, although you could play it seamlessly with any retro clone, too.  It's suggested for adventurers level 3-5.

The premise of the adventure is simple; a portal exists in the nearby wilds, a dungeon door flanked by giant ape-heads, and local legends warned that those who have approached the gates are either destroyed or devoured.  That all changed a few months ago when the portals opened from the inside, and hyena-men raiders started boiling out of the dungeon into the countryside.  Other adventurers have tried to enter the place, and never returned.  A number of suggested plot hooks and rumors are provided to give the players a reason to come and investigate it for themselves.

The complex itself was created as a laboratory and vault by an interloper from elsewhere, the titular Gann.  The three dungeon levels describe the servitors, traps, and defenses left behind by The Gann to guard a nuke-like super weapon, the Apocalypse Seed.  Furthermore, the dungeons have been breached from below, introducing other factions besides the servitors.

The module uses a blend of unusual monsters that complement the labs and defenses to give the complex a weird science vibe; trained servitor apes are the backbone of the work force, along with ape variants (like flesh golems made of misshapen stitched ape parts).  Additional atypical monsters are culled from the various AD&D monster books like the Grell, Cifal, or Sandman, and they are situated in the environment rationally and logically.  There is a fantastic new monster, the Zerpanax, which merges symbiotically with a human thrall, that will be sure to unnerve players, and an old classic from the Monster Manual makes a well-conceived appearance as a mastermind and major boss monster.

I'm predisposed to like a module like this, with all those lumbering ape servants in a mad wizard's laboratory calling to mind Hellboy and the kriegsaffe working for the Nazi scientist brain-in-a-jar (never mind Red Ghost, Monsieur Mallah, Gorilla Grodd, or any number of enhanced simians in the comics).  Apes and weird science mix like chocolate and peanut butter.  Giant ape-head stone guardians with disintegrator eye beams hit the sweet spot.  I could see filing off the serial numbers and using this in one of the lower levels of the Black City campaign, which shares a bit of a weird science vibe, replacing The Gann with one of the ancient Greys.

Otherwise, this is a three level dungeon that can fit into just about any campaign. The challenges require a crisp level of play and take advantage of AD&D's baroque complexity to address factors such as ethereality, the use of unseen servants, and various wizard locked doors.  If the players are lucky enough to persevere to the end, they might gain possession of a devastating weapon, capable of laying waste to a kingdom, and creating some ongoing messiness for the campaign - always a good thing.