Despite a nice east coast snow storm last night, the roads are clearing up quickly today and there shouldn't be any problems for the gaming group to make it tonight - so I'd better get a report posted for last game!

The most recent game session was essentially one long battle - a drawn out, tactical slugfest, where the party took on the minions and resources of a diabolical intelligence called Zoltan the Welder.  In many of the recent sessions, the party was teaming up with an entity calling itself "Odin", performing small missions for Odin in the course of their regular explorations beneath the ruined city.  Many of these missions have involved things like restoring energy to parts of the dungeon, or fixing "network connections' between Odin and the remote areas of the Transit Tunnels.  In this way, Odin is gaining more access (control) over the tunnels and is able to project his consciousness and power in more areas.  The players keep wondering if they should continue to cut deals with Odin, but the pay has been good.

(Odin, incidentally, claims to be a Norse god, trapped by the ancient builders of the city to watch over the earth from an orbital space platform.  The party traveled to Odin's realm from the top of a crooked spire in the southern part of the city.  They're beginning to cotton on that maybe Odin is a rogue telepathic super computer with delusions of grandeur.  I wonder if it’s a problem that some of their recent capers have armed Odin with ancient, earth-scorching, super weapons?  Muhaha.)

Zoltan was identified by Odin as a demonic entity trying to usurp parts of the dungeon under the city, a direct competitor to Odin's sovereignty.   In a previous game session, he gave them something called an "M-crystal" that would pacify Zoltan if the party could swap out Zoltan's existing M-crystal; he showed them a holographic image where Zoltan's crystal was located in a wall in the demon's lair.  The party has been scouting the most northeastern dungeon, the Ice Cave dungeon, for the past few sessions, looking for Zoltan's lair, and they found it at the end of the game session before last.

Zoltan's lair is a gigantic, dimly lit chamber obscured by tables, equipment bins, and wheeled conveyances in various states of repair.  Robotic arms and tentacles hang from the ceiling and whirled along on metallic track balls.  In many ways, these areas of the Black City are reminiscent of Gamma World; before the fall, Zoltan operated a robotic factory that built the train cars that ran through the undercity.  Now he vivisects elves.  I really have to run a Gamma World campaign some time, I think it would be great fun.

Zoltan himself appeared like a huge, empty, hockey mask stuck to the wall, with baleful eyes glaring about.  He projected an image of himself that floated around the room, hollow robes topped by the glaring hockey mask head, with boney hands at the end of the sleeves.

The assault itself was three hours of D&D tactical combat glory, intricate enough that it warranted busting out the vinyl grid and using miniatures and tokens to track the action.  The party activated their giant robot, and it charged in, tearing robotic arms from the ceiling and drawing heavy fire.  Zoltan countered by attacking with ceiling arms topped with claws, knives and cutters, and white hot torches.  Zoltan's avatar also floated around the room, using telekinesis to grab characters and fling them around, dark jedi-style.

The party fighters formed a strong front, headed right for Zoltan's giant face-in-the-wall and the location of Zoltan's vulnerable M-crystal.  Timur the Russian Elf made an impassioned plea to Zoltan's slaves, a group of Dokkalvir (Norse dark elves) that were cowed and tortured into serving the Welder, and the elves flipped to the party side, drawing some enemy fire as well.

Brick, Agnar's Halfling retainer, was the MVP of the fight.  While all the heavy combat was happening, Brick was given Odin's replacement M-crystal, tucked it under his arm like a football, and he picked and weaved his way across the battlefield, around bins, under tables, and skulking alongside the wheeled train.  It took a number of rounds, but eventually Brick was sneaking right to the base of Zoltan's giant head, unnoticed in the larger melee.  "Hey, what are you doing down there, little man?  Close that panel at once!", cried the face on the wall.

Brick was able to avoid the telekinetic grab attack (good Save vs Magic, duh), and slammed the new M-crystal home.  Zoltan screamed and his face eroded, shaking back and forth and finally morphing into the likeness of Odin, as his control over the area was usurped. The surviving robot arms went limp, and the battle was over.

"We just totally pulled the Lord of the Rings maneuver on Zoltan", called out Smitty.  "Full frontal assault while the little guy snuck into Mordor and blew up the ring".

We ended shortly thereafter; the ascendance of Odin into Zoltan's lair gave the party a safe place to rest, and they wanted to take a few days to recover while still in the Ice Cave dungeon and tally some experience.  After seeing the destructive power of their robot in action, they're even thinking about smashing their way into the ice cave this week, heedless if it's actually a dragon's lair, to see how much damage the robot can dish out.  Should be interesting.

Here's an updated schematic of the Transit Tunnels, showing the locations of the recent delves - the caves of the frost gremlin queen, where they saw the jotun head frozen in the ice, is plotted, and I've marked the last dungeon in the Transit Tunnels, which the party is calling the Ice Cave dungeon. 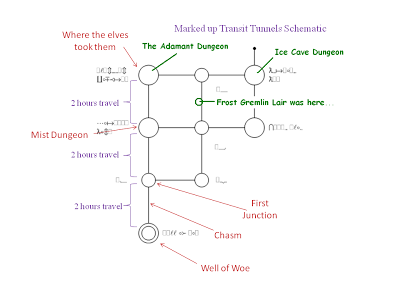 The pace of character death has slowed in recent weeks and they now have a bunch of level 3 characters - almost ready to revist the upper ruins near the glacier again, or head to the vast caverns below the tunnels.