The Dungeon Under the City


The City State of the Invincible Overlord (CSIO) is one of those legendary publications from early D&D.  It describes a sprawling city, very much in the Sword & Sorcery mode, with numerous malign temples, shadowy cults, and nefarious characters and activities.  The sewers beneath the city were written up as dungeons in a product called Wraith Overlord.  (I never had the originals, but had the Necromancer Games versions that were updated for 3rd Edition).

Inspired by the CSIO, Scott posted this blurb as a kick-off to such a campaign:

His Incomparable Effulgence the Dread High Dingus of the Great City of Faz has decreed that the Underworld beneath the City is open for plunder, its denizens to be regarded as caitiffs and malefactors utterly without recourse to the otherwise boundless beneficence of the law.

You have consulted with a hooded figure in a soggy reeking tavern, the consensus being that information thus gleaned is unimpeachable in such matters.  His sibilant counsel is that one ingress to the maze lies in the Furtive Quarter, in the cellars of the ruined Temple of Ghonk.  And that is where you, suitably outfitted and girded, find yourselves.
-From Huge Ruined Pile

How awesome is that?  Now, fueled by my experiences running the weekly Black City, I'll point out some additional opportunities why this type of campaign strongly appeals - besides the short walk to the home base.

Human Mayhem
The BX bestiary is filled with human opponents:  bandits, acolytes, mediums, traders, veterans, berserkers, and more.  A dungeon beneath a city could be filled with smugglers, thieves, assassins, rival priests, and all sorts of malcontents and scoundrels.  Encounters with other humans are generally excellent for my game; NPC adventurers are muy deadly; humans offer excellent roleplaying; human encounters alter the equation of attack or flee more directly than monster encounters; every encounter can be a bit of a stand-off or showdown.  Putting the dungeon right under the city ensures a regular stream of human opponents and complications.

Modularity
The transit tunnels below the ruins of the Black City are like a giant subway system, with 5 medium dungeons and another 5-6 mini dungeons separated by long hauls; spreading them out geographically gives me space to diversify the environments and create a sense of scope and distance.  I think the same effect could be achieved with a sprawling sewer dungeon. 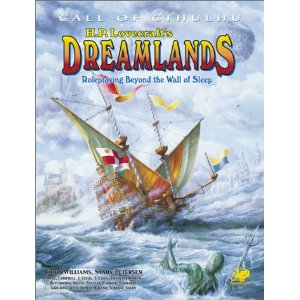 Lately I've been reading HP Lovecraft's Dreamlands, a Call of Cthulhu setting based on the author's fantasy works.  I've added some more Lord Dunsany to my reading queue as well - I have a business trip coming up and expect to get a lot of reading done on the plane; plus, I always thought The Gods of Pegana were a Wilderlands influence.  The Dreamlands has plenty of sprawling cities, beneath which lie passages and ways to the many storied and monstrous realms beneath the ground, like the Vaults of Zin or the Vale of Pnoth, or the City of the Gugs.  Sewer dungeons leading to a mythical underworld are full of possibilities.

(Not saying that I'd use the Dreamlands other than as inspiration, although it does seem awfully ripe for a cool D&D campaign).