Pleasant surprise yesterday - the Player's Companion for the Adventurer Conquer King System (ACKS) arrived.  Wahoo. Looks great, inside and out: 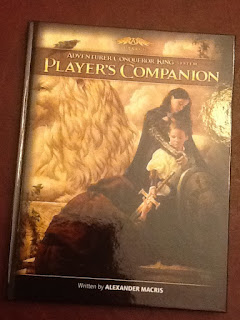 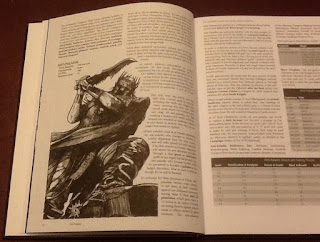 Back when the Kickstarter backers gained access to the draft, I did a mini-review and survey of the preview contents - 19 new classes, templates (equipment packages and skill selections to speed character generation), 20+ pages on building custom classes, a large spell selection, and some supplemental rules  - new proficiencies, tables for generating followers for high-level characters, things like that.

If you're not familiar with ACKS, here's a quick overview:  I view it as the spiritual successor to BECMI, the Rules Cyclopedia, and the Mystara approach to expanding classic D&D play.  It uses the basic D&D chassis, with a  skill system that's an advancement over the Rules Cyclopedia; it adds domain management, economics, and campaign rules; quirky niche classes similar to the Gazetteer series for Mystara; unlike BECMI, it caps the class and level system around level 14 (instead of level 36 in BECMI); expecting a campaign to last to level 36 just seems nuts to me.

In my current campaign, now that the players have cleared most of the Transit Tunnels (in the Black City game), it's likely we'll get back to Gothic Greyhawk in the near future as I'll probably need a small break to design the deeper levels of the Black City below the caverns (covering play levels 4-5); with the publication of the Player Companion, I'm going to suggest we convert that campaign entirely to ACKS - we were already using ACKS to handle the economics and domain rules for the player's holdings, and I haven't been happy with using the AD&D 1E combat rules.  The new classes cover just about everything we have in the Gothic Greyhawk campaign.

Kickstarter Updates
Meanwhile, late Kickstarters are the order of the day.  Here's a bleak rundown on campaigns I've backed.  The ACKS Player's Companion Kickstarter happened almost a year ago - glad to see it over the finish line.  The woes of Dwimmermount are well-publicized (it was due last summer).  The LOTFP Hardcovers are still MIA, with slow but steady progress (due last fall).  The LOTFP grand adventures look like they'll be out late spring (due this winter); the guns supplement for LOTFP is probably going to be a year late.  I signed up for Sine Nomine's Spears of the Dawn; that looks like it's going to be the first project that's actually early!  Pelgrane's Drama System seems to be moving along right on schedule; Sense of the Sleight of Hand Man (for Call of Cthulhu) is delayed by a half year; although not technically a Kickstarter, MRP's Tales of the Sleepless City (a Cthulhu anthology of 1920's New York scenarios) is close to publication, but 6 months after preorders started.  Horror on the Orient Express had a year of lead time, so Chaosium could be on track.

Savvy publishers are learning a few things - either have a finished manuscript before launching a campaign, and use the Kickstarter approach just for polishing and capital, or heavily warn backers that an item is unfinished and/or unwritten, and rife with the associated risks.
Posted by John Arendt at 8:26 AM